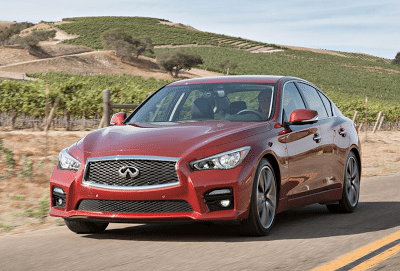 The BMW 3-Series and Mercedes-Benz C-Class represent a top tier of entry level luxury sports sedan class that’s typically so far removed from rivals as to be considered a class all of their own.

To say the 3-Series (and 4-Series, which was the 3-Series and which BMW USA continues to include with 3-Series figures) is the best-selling premium brand car in America is a little like saying the Toyota Camry is America’s best-selling car overall. It almost goes without saying. And the C-Class’s number two ranking is all but mandatory.

Yet collectively, those second tier cars sell more often than the 3-Series, 4-Series, C-Class, and C-Class coupe. The 21,026 sales collected by the 3er, 4er, and C-Class in November were outmatched by the 21,410 sales generated by the Audi A4, Audi A5, Infiniti Gs and Q50s, Lexus’s IS, and the Volvo S60.

The gap between those cars – the BMW and Benz versus the two Audis, three Infinitis, one Lexus and one Volvo – is a much more substantial 8482 units through eleven months, a figure which both points to the domination of the top two cars but also to the depth of options buyers have. And it also draws out attention to the second tier’s dominant players.

Excluding the A5 and Allroad, Audi has sold 33,201 A4s this year, a figure which doesn’t quite measure up to Cadillac’s 34,432-unit ATS total. Lexus IS sales are growing rapidly, but at 29,603 through eleven months, the IS isn’t quite as popular as the ATS, either, although it has outsold the Cadillac in every month since July. (The IS is aided to a small degree by the inclusion of the ISC. Cadillac has but one ATS bodystyle.) Volvo is way back with a little more than 21,000 S60 sales; Acura hasn’t reached 17,000 TSX and TSX Sport Wagon sales, as the ILX has surely stolen away a fair number of buyers.

Infiniti’s sedans are the true challengers for the C-Class and 3-Series. The G sedan and its Q50 successor have generated 42,044 sales this year, but they only trailed the C-Class – coupe included – by 704 sales in November. And don’t forget the new Mercedes-Benz CLA’s own impact.

Judging the Cadillac CTS on a year-over-year basis will be a challenge in the coming months as Cadillac’s highly regarded third-gen car moves into a slightly different E-Class-oriented market. Cars.com currently shows 11,056 new CTSs in dealer inventory, and of the 4558 sedans in that total, 2431 are new 2014s, although a handful of those are Vs based on the previous-gen car. In other words, current CTS sales figures are not a reflection on the new car’s desirability quotient.

Source: Automakers & ANDC
* vehicle also displayed in another GCBC segment breakdown
^ BMW USA, not GCBC, has decided to combine sales figures for the 3-Series and 4-Series, and same goes for the Acura RLX and RL.
^ A4 includes Allroad, without which A4 sales were up 9.1% to 3169 in November, up 3.6% to 33,201 YTD as Allroad fell 10.3% to 392 in November and rose 84.7% to 4950 YTD.
^ Combined, the new Q50 and the outgoing G were up 59.2% to 7702 in November, down 5.4% to 51,388 YTD. Jointly, Q50 and G sedan sales were up 85.9% to 7174 in November; down 0.7% to 42,044 YTD, and the G37 coupe/convertible and Q60 were down 46% to 528 in November; down 22% to 9344 YTD.
GCBC isn’t here to break down segments, an impossible task for any group, but to display sales data for the sake of comparison. The more ways sales data can be displayed, the better, right? This explains why you’ll see the Acura ILX here but also with mainstream cars like the Buick Verano, too, and the Audi A5 is also displayed with coupes and convertibles… because readers have wanted it both ways. You can always find the sales results for EVERY vehicle and form your own competitive sets by using the All Vehicle Rankings posts.