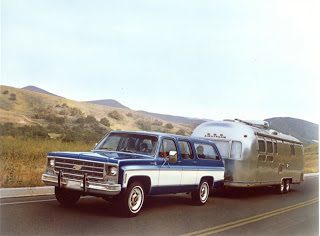 The growth rate among full-size, mainstream brand sport-utility vehicles on sale in America exceeds that of the improvement reported by the U.S. automobile industry as a whole, both in April and through the first four months of 2013.

But year-over-year improvements aren’t the whole story, right? After all, sales of the Porsche Cayman jumped 488% in April, but that was only a gain of 327 units in a market which gained more than 100,000 sales compared with the same period a year earlier. In America, however, large SUVs remain moderately high-volume vehicles.

Chevrolet’s Tahoe was the 13th-best-selling SUV or crossover in April, ranking ahead of all three GM Lambda platform crossovers, including Chevrolet’s own Traverse, not to mention 75 other SUVs and crossovers. From a ranking of 23rd at the end of the first quarter, the Tahoe climbed to a year-to-date ranking of 21st at the end of April.

In all, 5% of utility vehicle sales in America this year have come from these seven nameplates. And of the 74,998 large, mainstream brand sport-utes sold, 74% have been because of the General Motors quartet.

Combined, Acura, Infiniti, and Lexus have sold 74,481 SUVs and crossovers this year.

You can click any model name in the tables below to find historical monthly and yearly U.S. sales data. You can also select a make and model at GCBC’s Sales Stats page. These tables are now sortable, so you can rank U.S. large SUVs any which way you like. Suggestions on how GCBC should break down segments can be passed on through the Contact page.