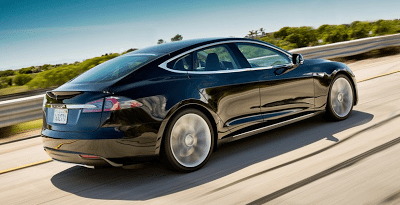 Excluding the extraordinarily unconventional Tesla Model S, which appears to be selling in greater numbers than high-end European sedans, the Mercedes-Benz S-Class continues to be a segment leader. Lexus LS sales have been rising quickly in 2013, but the S-Class is 620 units ahead of the Lexus through four months.

Sales of BMW’s 7-Series continue to slide as sales of the 6-Series, which is available in three different bodystyles, continue to rise. Because of its coupe and convertible origins, we also show the 6-Series in comparisons with the Porsche 911 and Mercedes-Benz SL. So it’s worth noting that in addition to 1103 S-Class sales in April, Mercedes-Benz also sold 37 CL-Class coupes.

For a moment, however, let’s assume 2000 U.S. Tesla Model S sales in April. That would take the top-end luxury car category up to 6725 sales for the month, up from 4389 a year ago, including the 6-Series. Tesla’s share of that category in April would thus be 30%. The otherwise-class-leading S-Class’s share would therefore be 16%, down from 22% last April.

But here’s the thing, S-Class sales are growing in spite of the Tesla’s introduction. Audi A8 volume is increasing too, as is BMW 6-Series volume, and Lexus LS volume. Even without the Tesla’s estimated 2000 U.S. April sales, sales of these premium cars were up 8% last month.

Source: Manufacturers & ANDC
* vehicle also displayed in another GCBC segment breakdown
Tesla reported 4900 Model S sales, North America-wide, in the first three months of 2013. HybridCars.com estimates another 2100 Model S sales in April. Even an assumption of just 90% of these sales occurring in the U.S., the Tesla is easily outselling all flagship luxury limos.
GCBC isn’t here to break down segments, an impossible task for any group, but to display sales data for the sake of comparison. The more ways sales data can be displayed, the better, right? This explains why you’ll see the XTS and MKS here but also with midsize luxury cars, too, as those are the vehicles with which they are more competitively priced… because readers have wanted it both ways. You can always find the sales results for EVERY vehicle and form your own competitive sets by using the All Vehicle Rankings posts.
Sales data for brands such as Aston Martin, Ferrari, Lamborghini, Lotus, Rolls-Royce etc. are unfortunately not broken down by model. estimates say sales for those brands in the first third of 2013 were 276, 648, 184, 88, and 336, respectively. Total Maserati and Bentley volume is reported, but not by specific models.