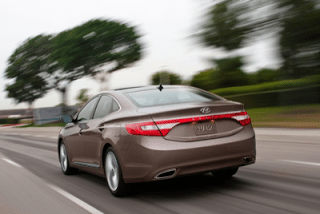 Hyundai and Kia sold 4094 copies of their most expensive sedans (and coupes) in May 2013. The Kia Cadenza is only just getting going, but one can figure that it won’t be much more capable than its partner at Hyundai, the Azera, at selling in large numbers in the United States.

Toyota sold eight Avalons for every Azera sedan Hyundai sold in May. The Avalon was by no means the class leader – although sales have dramatically improved – and the Azera sold at a rate which was about 1.8 times stronger than that of the Cadenza. Hyundai has the benefit of also selling the Genesis sedan and coupe, sales of which are down 14% this year. The Kia Quoris will be a rear-wheel-drive sedan priced above the Genesis when it hits the market.

Bigger numbers are achieved by America’s domestic automakers. The Canadian-built Chrysler 300 and Dodge Charger combined for 13,281 sales in May. Chevrolet’s Impala, which has production facilities in both Canada and the U.S., was down 32% in May. In the midst of a generational change, Chevrolet sold more than 2350 new Impalas. Buick LaCrosse sales fell 15% in May and are down by 3203 units through five months.

What of the premium brand contenders? GCBC lists sales from Lexus and Acura elsewhere, not to mention sales of smaller but sometimes more expensive sport sedans, too. Acura TL volume fell 18% to 2682 units in May; Lexus ES sales rose 101% to 5890.

You can click any model name in the tables below to find historical monthly and yearly U.S. sales data. You can also select a make and model at GCBC’s Sales Stats page. This table is now sortable, so you can rank large cars any which way you like. Suggestions on how GCBC should break down segments can be passed on through the Contact page.

Source: Manufacturers
* vehicle also displayed in another GCBC segment breakdown
GCBC isn’t here to break down segments, an impossible task for any group, but to display sales data for the sake of comparison. The more ways sales data can be displayed, the better, right? You can always find the sales results for EVERY vehicle and form your own competitive sets by using the All Vehicle Rankings posts.