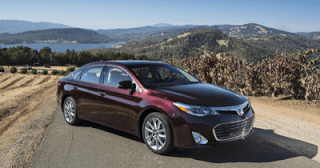 The Avalon is certainly not the dull-looking sedan it’s been in the past. Although no enthusiast is going to find it particularly exciting, the biggest Toyota sedan does feel like much more than a Camry XLE V6. And if a buyer doesn’t want a conventional luxury car – like Lexus’s ES, which sold 4817 times in February – the Avalon is a much more enticing prospect than it’s ever been. Toyota has been marketing the car like crazy, too, even in Canada, where this type of car is exceedingly rare.

Many of these cars are perceived by some consumers to be outright luxury cars, and for this reason, some of them are displayed in GCBC’s luxury car sales posts. The Chevrolet Impala, Dodge Charger, and Ford Taurus, with their sub-$27K base prices, are not.

Historical monthly and yearly sales figures for any of these big cars can be found by clicking the model name in the table below. Or make a selection at GCBC’s Sales Stats page. (Non-mobile users can select a make and model near the top right of this page, as well.) Two of these cars also appeared on the list of America’s 20 best-selling cars in February.

Source: Manufacturers
* Indicates a model that is also shown in another GCBC segment breakdown