During the same period in which U.S. sales of the Chevrolet Cruze have fallen harshly, sales of the Cruze’s subcompact sibling, the Sonic, have risen sharply.

Fortunately for Chevrolet, the Sonic is making up for the Cruze’s losses. Although this didn’t prove to be the case in the month of July, at this stage of 2011, with seven months of car selling complete, Chevrolet had sold 173,070 compacts and subcompacts. This year, including 58 Aveos and 11 Cobalts, Chevrolet has sold 174,256 compacts and subcompacts. And now, we can throw in another 1460 Sparks for a total of 175,716 small car sales. 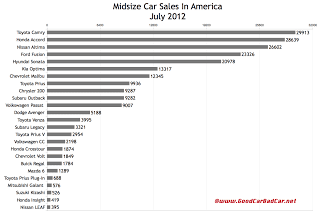 During the same seven months, Chevrolet’s two bigger cars, the Malibu and Impala, have found 261,636 buyers, up 3% from the first seven months of 2011. Conversely, Chevrolet sold 207,243 Equinoxes, Traverses, and Captiva Sports; 66,840 Suburbans and Tahoes, and 223,480 Silverado pickup trucks.

You’ll find so much more than just Chevrolet sales figures in the three tables visible after the jump. Moreover, historical monthly and yearly sales figures for every vehicle currently on sale in the United States can be accessed, free of charge, through the first dropdown menu at GCBC’s Sales Stats home. Click either of the three accompanying charts for a larger view where every small, midsize, and large car is sorted by July 2012 volume.