The U.S. auto industry made 9% gains in July 2012 as the market for new cars and trucks and SUVs continued to improve amidst peristent economic uncertainty. As expected, the three Japanese giants – Toyota, Honda, and Nissan – posted big year-over-year improvements, but the Chrysler group also surged while GM and Ford slid.

Retail operations weren’t to lackluster from the two bigger Detroit corporations. In fact, Ford retail sales were up 2%. Meanwhile, at GM, fleet sales were down 15%. 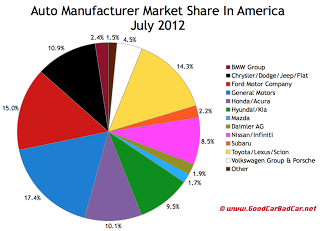 The table below is now completely full with 36 different brands. Mercedes-Benz led the way among premium producers. Ford’s 165.6K output propelled it to a 27K-unit lead. Mitsubishi fell the hardest. smart climbed the farthest, relative to its own July 2011 performance. Scion, with help from a new sports car which happens to be its most popular model, climbed the farthest among non-ultra-niche brands. Dodge, Infiniti, and Honda made huge gains, as well.

You can access a free database full of historical monthly and yearly sales figures for every model on sale in America through the first dropdown menu at GCBC’s Sales Stats home or near the top right of this page. U.S. best seller lists for cars, trucks, and SUVs will also be published later this afternoon. Keep hitting refresh.