You’ve figured it out: Volvo, at least in America, is an S60/XC60-oriented company. This reliance on specific models isn’t unusual among semi-premium brands. The MKX accounted for 44% of Lincoln sales in January; the G and JX were responsible for nearly seven out of ten Infiniti sales last month; the ES and RX just under one-third of all Lexus sales in January. 71% of Porsche sales came about as a result of the Cayenne and 911.

But the biggest luxury players find decent U.S. volume with a wide range of models. BMW possesses four models – two cars and two SAVs which sold more often than the most popular Volvo. Mercedes-Benz had five, including two cars. Cadillac’s SRX, ATS, and CTS outsold the leading Volvo. Acura’s MDX and RDX did the same. As did Infiniti’s G and JX; Lexus’s ES and RX; Audi’s A4 and Q5. 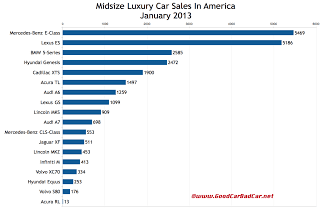 This isn’t Volvo bashing. And while plenty of automakers sell fewer cars these days than in the pre-recession era – Volvo sales plunged 51% from 2004 to 2012; Lexus dropped 19% between 2005 and 2012  – Volvo market share slid from 0.8% in 2004 to 0.5% in 2012. And why? It doesn’t help that Volvo sold nine different models in 2004 but only sells seven now, and two of the seven are on their way out. This is about Volvo wishing. Wishing that the brand would be inspired by its history. Wishing that it would update aging products. Sure, an S60 Polestar looks like fun. But before Volvo needs an M3-baiter, it might need… you know, a wagon.

This luxury car sales post has been wholeheartedly changed. It now includes a number of cars GCBC displays with other segments, too, like the Chrysler 300 and Buick Verano. These additions allow readers to see how cars fare against similarly-priced nameplates, not just the cars that have a lofty brand image. The accompanying charts can be clicked for a larger view. Any model can be clicked in order to find historical monthly and yearly sales figures. Or select a make and model at GCBC’s Sales Stats home. Best of all, the tables below are now sortable. Click any column header to rank vehicles by volume, year-over-year change, or re-sort alphabetically to return to the original.

Source: Manufacturers &
* Indicates a vehicle that is also shown in another GCBC segment breakdown