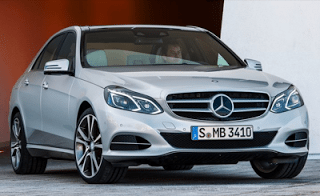 Strong C-Class sales have propelled Mercedes-Benz USA to a meaningful lead in the premium brand sector in the first two months of 2013. The C-Class sedan and coupe have built up a 2712-unit lead over the BMW 3-Series, which also trails the Lexus RX utility by 528 units.

Sales of premium brand hatchbacks have struggled so far this year. The Audi A3, soon to be replaced at least in part by a new sedan, the Lexus CT200h, and the dying Volvo C30 have fallen 41%, 18%, and 37% through two months. In a not dissimilar price bracket, the Buick Verano (reviewed in Turbo form by GoodCarBadCar) and Acura ILX have been wildly more popular.

Larger, but still affordable luxury cars like the Acura TL, Lincoln MKZ, and Infiniti G have posted huge declines in early 2013. The MKZ has been replaced, but inventory is low. The G37 will soon be replaced by the gorgeous Q50. In February 2013, the TL posted its fifth consecutive month of year-over-year decline.

GoodCarBadCar breaks down the luxury car segment into multiple categories, not because this is a segment breakdown site, but because we endeavour to display cars alongside their nearest competitors, if not in pricing terms than in size terms. Automakers aren’t beholden to specific “midsize” dimensions, nor are they restricted price-wise by the image their logo represents. (You’ll find luxury flagship sedans showcased in this post.) We’re always open to suggestions on how you would like to see segments broken down, so feel free to contact GCBC Towers at your leisure. 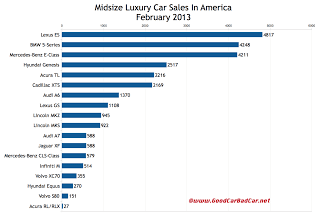 Of this there can be no doubt: the Mercedes-Benz E-Class and BMW 5-Series are direct competitors. Mercedes-Benz brings more bodystyles to the table, but BMW’s 5er did outsell the E-Class by 37 units in February. The Benz leads year-to-date standings by 2847 sales. A facelifted E-Class, which includes an all-wheel-drive E63 AMG, should further cement Mercedes-Benz’s leadership in the category, one it dominates with the 5-Series’ assistance.

Historical monthly and yearly sales figures for all these luxury vehicles, including the mainstream players which make the voyage over from these midsize and large car sales posts, can be accessed by clicking the model names in the table below or by selecting a make and model at GCBC’s Sales Stats page.