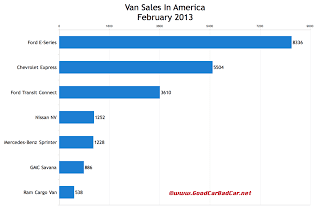 21,354 commercial vans were sold in the United States in February 2012. Declines were reported by the best-selling Ford E-Series and the slower sellers at General Motors and Chrysler.

Overall, the segment was worth 1.8% of the new vehicle market’s volume and through first two months of 2013, that figure stands at… 1.8%.

Fuly 58% of the commercial vans sold in the United States this year have been Fords. You can find historical monthly and yearly sales figures for any of the seven vans by clicking the model name below or by making a selection at GCBC’s Sales Stats page.