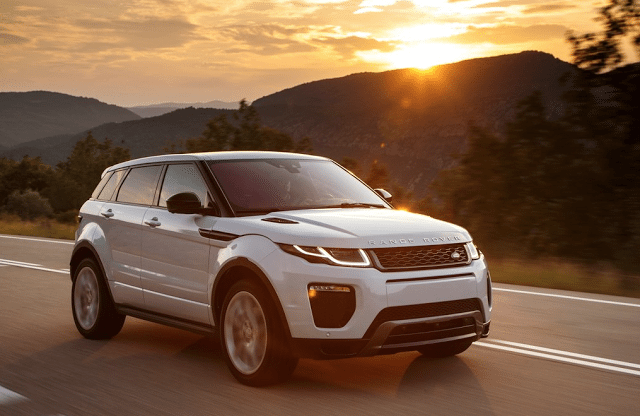 Compared with the first 11 months of 2014, the list of the five fastest-growing automobile brands in the United States in 2015 include two brands which only build SUVs, one brand which sells only one niche model without all-wheel-drive, and two resurgent auto brands which generate the majority of their sales with utility vehicles.

U.S. auto sales volume has grown 5.4% through the January-November period of 2015, and 17 auto brands are growing faster than the market average.

For the purposes of this list, we’ve excluded Alfa Romeo. Alfa sells but one model, the 4C, and didn’t sell it for most of 2014. Alfa’s year-over-year gain, therefore, is obviously going to be significant, and at 2425%, it is. 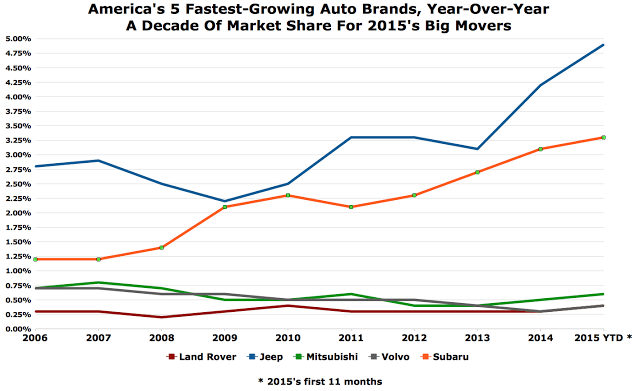 #5: SUBARU +13.5%
Consumers want practical, affordable, high-riding, all-wheel-drive vehicles. Subaru has a bunch of examples for you to try on, from the small XV Crosstrek to the bigger Forester to the wagon-like Outback. The trio is up 12% to 375,459 U.S. sales in 2015, or about seven out of every ten Subaru sales.

#4: VOLVO +18.0%
How desperate was Volvo for the XC90? After their former best seller crumbled over the course of a decade to eventually form only 7.5% of Volvo’s U.S.s ales in 2014, the XC90 is once again outselling other Volvos in America. In November, Volvo volume jumped 91% as the XC90 generated 32% of Volvo’s sales.

#2: JEEP +23.3%
The market share of SUVs and crossovers in America has grown from 32.1% in 2014 to 35.1% in 2015. Which auto brand is better positioned to take advantage of this surge in SUV/CUV demand than Jeep, which only markets affordable utility vehicles? The addition of the Renegade has helped, but even without that subcompact utility, Jeep sales are up 15% in 2015.

#1: LAND ROVER +35.9%
The greatest year-over-year gain, therefore, belongs to Land Rover, sales of which are up 36% in 2015. A new model, the Discovery Sport, is far more successful than the departing LR2 was a year ago. But the majority of Land Rover’s sales aren’t produced by the entry-level Disco Sport. The Range Rover and Range Rover Sport, Land Rover’s two most costly models, generate 57% of Land Rover’s U.S. volume. Their sales are up 41% and 21%, respectively.