U.S. sales of luxury utility vehicles in December 2012 grew forcefully at Audi, Volkswagen, and and Porsche, grew substantially at Volvo, and grew at an average rate at Land Rover. Four of the ten best-selling premium brand vehicles in America last month were SUVs or crossovers, including the top-ranked Lexus RX, sales of which rose 15.5% in December. (The RX trailed the BMW 3-Series by a small margin in the year end standings.)

You’ll notice that the RX and Cadillac SRX are listed in both tables below, giving you the opportunity to see how they perform against either slightly smallexuler or slightly less expensive SUVs or vice versa. 2012 was the second-best U.S. sales year for the RX in the last five. Cadillac sold more SRX crossovers in 2012 than in any year in the nameplate’s history.

Obviously, sales have never been higher than in 2012 for the BMW X1, Infiniti JX, and Land Rover Range Rover Evoque. They’ve only been on sale in America since August, March, and October 2011, respectively.

Want proof? Yearly U.S. and Canadian sales figures going back as far as 2002 (and monthly numbers going back to January 2010) are available for every model still on sale through the dropdown menu at GCBC’s Sales Stats home. That’s one way GoodCarBadCar.net has tried to make sales data more accessible. The other relates to the two tables which are visible after the jump: both are now sortable. Click any column header to sort vehicles by December volume or 2012 volume or alphabetically. 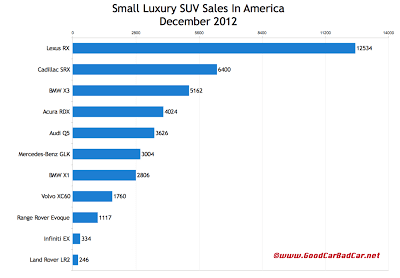 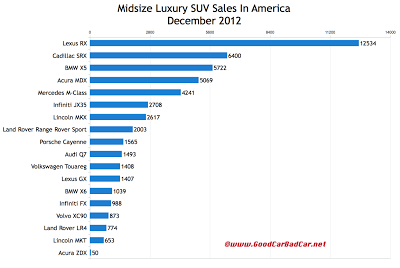