As you may have heard over the course of the last few weeks, Japan’s largest automaker has been struggling through recalls, quality concerns, and congressional hearings. For Toyota, this has inevitably led to difficulty in dealerships. While vehicles like the Toyota Corolla and Toyota Camry are still selling at a fairly healthy clip, the number of units pushed is not a healthy total for an automaker whose supply chain is set up for much higher figures.
With Toyota’s turmoil comes a Ford festival. Sales of Blue Oval vehicles in America were up 46.3% in February. Registrations of Chevrolet cars, trucks, and SUVs were 32.4% higher than in February of 2009. Toyota was down 10.6%. Only the Toyota Venza (a Good 12 winner for 2010), Toyota 4Runner (a Good 12 Supersize winner for 2010), Toyota Tacoma, Toyota Prius enjoyed improved sales when compared with the same period a year ago, a period that wasn’t the best for automakers to begin with. Improvements on a bad month are vital. Toyota couldn’t manage it.
The Top 10 Best-Selling Auto Brands in America are listed in the Graph below. Dodge’s Sales Stats total looks low, but remember the absence of certain vehicles which are now branded Ram. Add the two together and Dodge would move ahead of Hyundai with 44,185 sales. 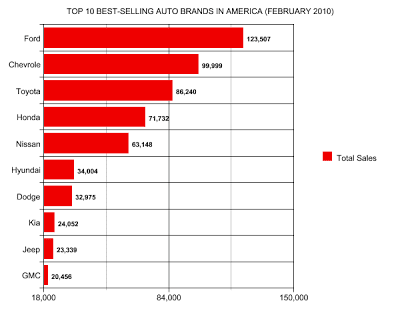