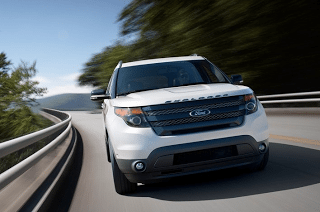 All five of America’s top-selling SUVs and crossovers in November 2013 sold more often than they did one year ago.

Indeed, in this list of the 20 top-selling SUVs and crossovers from November, only one, the Kia Sorento, has reported fewer sales over the last eleven months than during the same period one year ago. Mind you, the Sorento must do battle with its platform-sharing partner from Hyundai, the Santa Fe, which reported the second-highest year-to-date year-over-year sales improvement among vehicles in the top 20.

America’s top-selling utility vehicle is the Honda CR-V, and its lead over the second-ranked Ford Escape expanded by 2521 units to a still-tenuous 3614 sales through eleven months. Honda has never before sold this many CR-Vs in a November.

The CR-V, however, is not the story among SUVs and crossovers this month. No, that would be the Jeep Cherokee. Yes, that one, the one with the face. With pent-up “demand” on its side – the Cherokee’s launch was oft-delayed as Chrysler examined quality issues – Jeep sold more 10,169 Cherokees in the model’s first month on sale. For perspective, consider the Mazda CX-5’s first full month on sale: 3629 units. Or how ’bout the BMW X1? 1570 sales. The Mitsubishi Outlander Sport: 688 units. The revamped Nissan Pathfinder? 8097 sales. That’s not to say the Cherokee can continue at these lofty heights. You’ll notice that Pathfinder volume wasn’t that high one year later. Mercedes-Benz recently introduced the CLA-Class, and after selling nearly 5000 in October sold fewer than 4000 in November.

Nevertheless, the Jeep Cherokee, with one of the most powerful badges in the SUV world on its grille one of the most iconic SUV nameplates on its trunklid, was America’s eleventh-best-selling SUV in November 2013. That’s something.

Historical monthly and yearly sales figures for any of these best-selling SUVs and crossovers can always be accessed through the dropdown menu at GCBC’s Sales Stats page, and for those not viewing the mobile version of this site, near the top right of this page, as well. GoodCarBadCar has already published the list of America’s best-selling trucks in November and will shortly list America’s most popular cars, as well.