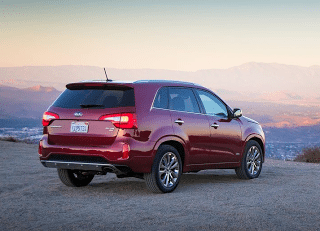 In June 2013, for the fourth consecutive month, Americans bought or leased more than 25,000 Ford Escapes. That only happened twice in all of 2012, and not once in the prior two years. Not surprisingly, with 28,694 total sales from the Escape in June, Ford took the top spot among SUVs and crossovers.

Moreover, Ford took the sixth and ninth positions, as well, with the Explorer and Edge, respectively. The Explorer, with assistance from 1009 Police Interceptor Utilities, was just nudged out of fifth spot by the Jeep Grand Cherokee.

With the Jeep Wrangler and Chevrolet Equinox included, six out of the ten best-selling utility vehicles in June were sold by Detroit brands, but only nine out of the top 20. Last month there were ten.

Only two of the 20 most popular SUVs in America reported declining sales in June. The 14th-ranked Kia Sorento is in the midst of a model changeover, but could be harmed nevertheless by a new model that looks a lot like the old model. Handsome though it may be, it doesn’t appear to be all-new at all. The GMC Acadia, meanwhile, couldn’t keep pace with the nameplate’s third-best month from the last two years as customers turned in increasing numbers to its platform mates, the Chevrolet Traverse and Buick Enclave.

Historical monthly and yearly sales figures for any of these models can always be accessed through the dropdown menu at GCBC’s Sales Stats page, and for those not viewing the mobile version of this site, near the top right of this page, as well. GCBC has already published rankings for dozens of different brands and 14 different trucks and will also soon publish a list of the 20 best-selling cars in America. These were the 20 best-selling SUVs and crossovers in the United States in June 2013.