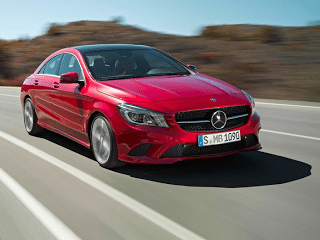 The 3-Series outsold the Lexus RX by 912 units and the Mercedes-Benz C-Class, its most direct rival, by 2132 units.

The C-Class’s September and future totals will surely be affected by the presence of the new CLA-Class. In its first month on the market, the CLA found 2310 buyers.

BMW’s inventory at Cars.com is currently showing 426 4-Series coupes in stock at BMW dealers to go along with 17,000 copies of the 3-Series. Mercedes-Benz’s inventory shows around 1400 CLA250s.

Cadillac ATS sales shot up 348%, but at 2739 units, the ATS fell far short of cracking this list of the top 15 best-selling luxury brand vehicles. Indeed, ATS sales in September were at their second-lowest level of the year.

Source: Manufacturers & ANDC
Red font indicates year-over-year declining sales
$45,000 USD (before delivery) is an arbitrary borderline, but if GCBC was to follow this system of designating only expensive vehicles as luxury vehicles, adding approximately $15,000 to the average new car transaction price seemed like a fitting place to begin. Plenty of less expensive vehicles with specific models feature prices above $45,000 – M, RS, and AMG models come to mind, specifically – but in the case of the second list, we know that none of the registrations were of cars priced at $32,550, as would be the case with the new BMW 320i, which costs less than a Honda Accord V6 Touring. The biggest problem with a $45,000 minimum price of entry? Cars like the Cadillac XTS, which starts at $44,075. Total Infiniti G/Q50/Q60 volume equalled 4988 units in August (up 35.7%) and 39,003 units in the first nine months of 2013 (down 15.3%.)