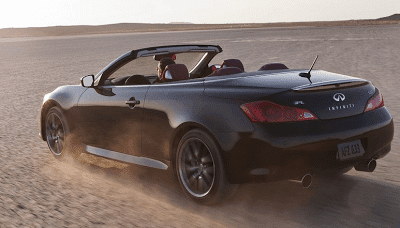 You won’t be surprised to see the BMW 3-Series at the top of a list of America’s best-selling premium vehicles, but the Infiniti G’s second-place finish in July 2012 comes as a shock to anyone who follows car sales statistics. The top three U.S. premium players in each month of 2012 up to this point have only included the Infiniti G once, in February, when the third-ranked Infiniti trailed the top-ranked BMW 3-Series by 2598 units.

If you care to stretch the idea of premium to include Buick (GM already has four Cadillacs in the top 30, including the all-new, 28th-ranked XTS), the Enclave, Verano, and LaCrosse all sold in the neighbourhood of 4000+ units in July. Specific monthly and yearly numbers for each Buick, for every vehicle currently on sale in North America, can be accessed through the first dropdown menu at GCBC’s Sales Stats home or, for viewers of the full site, near the top right of this page.

GoodCarBadCar.net already stretches the idea of “premium” to include the Hyundai Genesis, a car which, in the United States, displays sales figures for both the sedan and decidedly mainstream Genesis Coupe. Remove the Genesis from the list and the very luxurious BMW 7-Series becomes the 30th-ranked car. BMW sold 1696 7-Series sedans in July, Audi sold 1691 A6 sedans, and Lexus sold 1662 GS sedans. The Chrysler 300, which looks more and more haute couture every time I see it, found 3399 buyers in America in July.

Drawing a line between premium and non-premium cars is a subjective, challenging, and controversial task. How you draw the line, and how GoodCarBadCar draws the line, may not be similar at all. Such is life. Nevertheless, all the sales figures for all the cars are available on this very site, so you’re free to search them out and form your own top 30.

Below you’ll find the top 30 best-selling luxury vehicles in America from July 2012. Click the accompanying chart for a look at luxury brand market share.