BMW USA generated 47% of their U.S. July 2014 sales volume with the 3-Series and the 3-Series’ two-door (and four-door) 4-Series offshoot. This translates to 12,497 sales, the third consecutive month in five digits for the core BMW model. 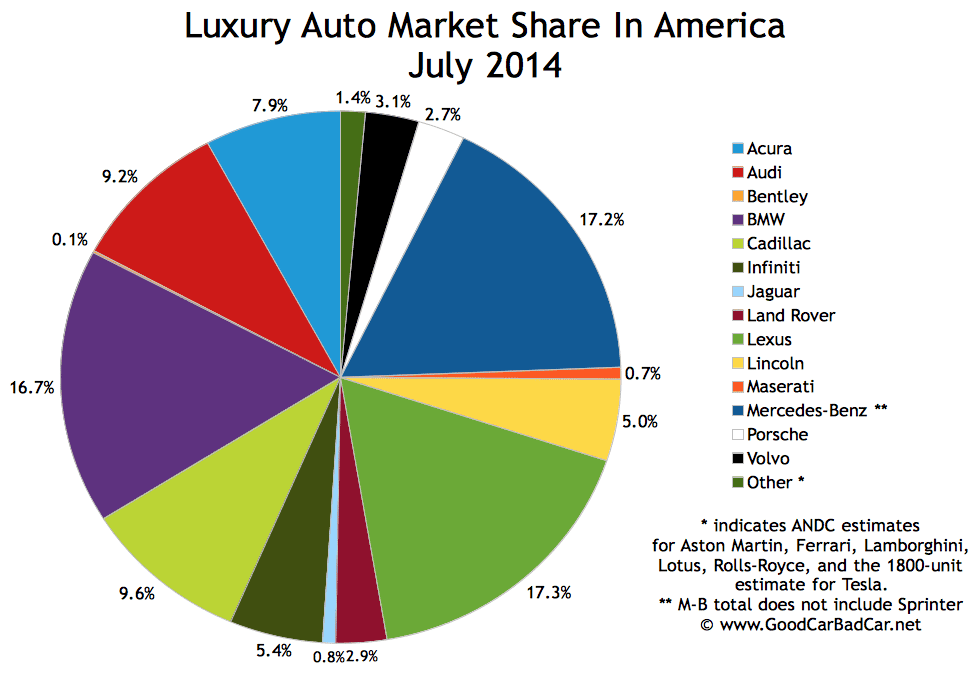 The Lexus RX led all premium brand utility vehicles and ranked second overall among these lux leaders. There was but one additional BMW, the seventh-ranked 5-Series, in the top 15. Lexus, the top-selling premium brand in America in July 2014, propelled three vehicles into the top nine.

Nine of the 15 best-selling premium brand vehicles in July were SUVs or crossovers. You’ll see that the tenth-ranked vehicle, the Cadillac Escalade, takes into account the sales of both Escalade variants. Ford Motor Company’s Lincoln Navigator sales figures are compiled this way automatically, so it’s not a bizarre approach. Nevertheless, if the Escalade and ESV were separated, neither would crack the top 15, granting entry to the Lincoln MKZ, sales of which slid 1.2% to 2776 in July.

Source: Automakers & ANDC
$45,000 USD (before delivery) is an arbitrary borderline, but if GCBC was to follow this system of designating only expensive vehicles as luxury vehicles, adding approximately $15,000 to the average new car transaction price seemed like a fitting place to begin. Plenty of less expensive vehicles with specific models feature prices above $45,000 – M, RS, and AMG models come to mind, specifically – but in the case of the second list, we know that none of the registrations were of cars priced at $32,750, as would be the case with the new BMW 320i, which costs less than a Honda Accord V6 Touring. The biggest problem with a $45,000 minimum price of entry? Cars like the Cadillac XTS, which starts at $44,600 and SUVs like the $48,895 Chevrolet Tahoe.
^ Escalade breakdown by variant
* BMW USA, not GoodCarBadCar, has chosen to combine sales of the 3-Series and 4-Series. GCBC combines sales of the Audi A4 and Audi A4 Allroad. None-Allroad sales were down 9.1% to 2717 in July.
In July, Infiniti sold 1340 copies of the Q50’s predecessor, the G sedan, and 682 Q60s to go along with 2461 Q50s. Cadillac’s new CTS – 2039 July sales – starts at $45,100, but the lingering CTS Coupe is a sub-$40K car, and the wagon starts at $42,195.