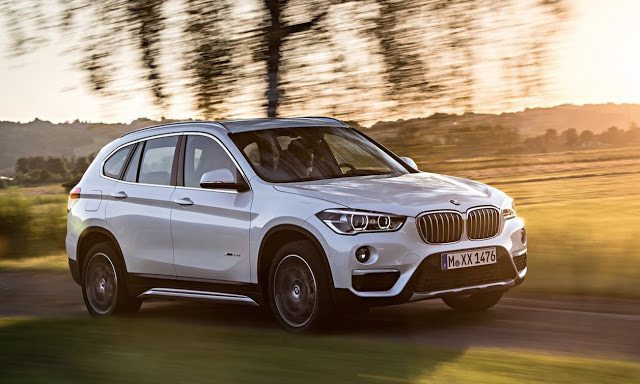 Forecasters called for year-over-year auto sales declines of up to 5% in the United States in August 2016. After U.S. auto sales rose to an all-time high in calendar year 2015, the first-half of 2016 exceeded 2015’s first-half pace. But U.S. auto sales growth slowed severely through the late spring and early summer, and August 2016’s ensuing decrease suggests that 2016 will not be a second consecutive record year.

Ford Motor Company’s 9% year-over-year drop and the 5% decline at America’s largest automobile manufacturer, General Motors, translated to a loss of 34,520 sales in August 2016. Fiat Chrysler Automobiles, on the other hand, posted a modest 3% increase despite sharp declines at Chrysler, Fiat, and Alfa Romeo. Jeep volume jumped 12%, a gain of 9191 sales. American Honda’s 4% decline was caused by a 7% drop at Acura, plunging Accord sales, and a sharp drop in Odyssey sales, as well. Nissan and its Infiniti premium sub-brand combined for a 7% loss despite modest Infiniti decreases and a 19% increase in Nissan light truck sales. Although Toyota reported improved RAV4, Highlander, 4Runner, and Lexus SUV sales, the overarching company slid 5% in August 2016. 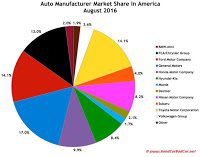 The Toyota Camry was America’s best-selling car in August. Ford’s F-Series led all pickups and vehicles overall. Honda’s CR-V was America’s top-selling SUV/crossover in August, and with record sales, now leads on year-to-date terms, as well.

If you don’t wish to see automakers arranged alphabetically, click column headers to sort automakers by August sales, year-over-year change, year-to-date totals, or any other order. Best seller lists for cars, trucks, and SUVs will be added later this afternoon. In the coming days, GCBC will also publish a complete list of year-to-date sales for every single vehicle line, a list which includes brand results. (Check out the 2015 version here.) You can always find historical monthly and yearly sales figures for any brand by clicking the brand name in the table below or by selecting a make (or model) at GCBC’s Sales Stats page.

Click column headers to sort by specific categories. Using the mobile version of GoodCarBadCar? Thumb across the table for full-width visibility or switch to the web version at the bottom of the page, at which point columns will be sortable.
September 2016 • July 2016 • August 2015 • Updated at 7:19 PM AT on 09.01.2016