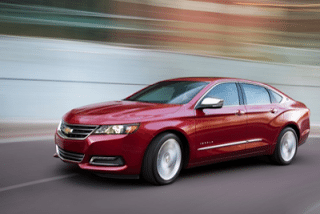 The F-Series was one of five trucks in the top 30. Together, those five trucks accounted for more than twelve out of every 100 new vehicle sales. With the Grand Caravan out of the top 30 (in the 31st spot) there was but one minivan, the 28th-ranked Honda Odyssey. With 15 cars in the top 30, this left room for nine SUVs and crossovers. With 181,268 sales between them, these nine utility vehicles attracted 12.6% of the new vehicle buyers in America in May.

Apart from order changes, the 28 top lines of this list appears consistent with April’s edition. The Kia Soul was, however, dropped from the top 30 and its place was taken by the 29th-ranked Ford Edge. Soul sales improved 12.6% in May; it was America’s 36th-best-selling vehicle, behind the Grand Caravan, Nissan Sentra, Subaru Outback, Honda Pilot, and Toyota Sienna.

Historical monthly and yearly sales figures for any of these models can always be accessed through the dropdown menu at GCBC’s Sales Stats page, and for those not viewing the mobile version of this site, near the top right of this page, as well. GCBC has already published rankings for 36 different brands and 14 different trucks and 20 SUVs and crossovers and 20 passenger cars. What you’ll find below, in case you hadn’t already guessed, is a list where all vehicles of all types are thrown in together: America’s 30 most popular vehicles from May 2013.