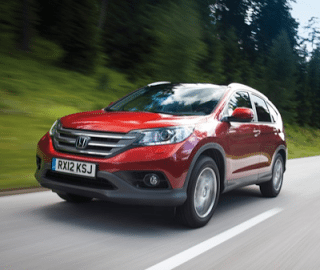 We knew months ago that the Ford Escape stood no chance. The Honda CR-V was bound to end 2012 as the best-selling SUV in the United States. Did we expect it to do so with a 29% improvement? Not so much.

The CR-V is one of two Hondas in this group of 25 SUVs and crossovers and one of eight Japanese-brand utility vehicles. Add to those Japanese SUVs two Korean nameplates and you see that, while not to the extent that it does so in the truck market, American manufacturers remain very strong players in the SUV category.

15 of the top 25 is one thing, but Detroit brands also ended 2012 with 60% of the ten best sellers. Like the four Japanese brand vehicles in the top ten, those six American SUVs all recorded year-over-year increases in 2012.

GoodCarBadCar.net has already published U.S. brand rankings for 2012 and truck and car best seller lists – you can find links to those posts at the bottom of this post. The table below ranks America’s 25 favourite SUVs and crossovers by 2012 volume, but if you’re looking for more complete data or information on another vehicle, use the dropdown menu at GCBC’s Sales Stats home. Select a make and/or model and away you go.