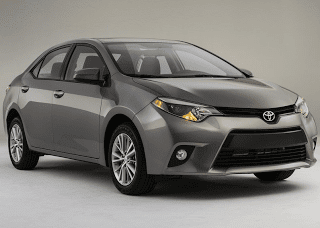 America’s 20 favourite cars in September 2013 were, for the most part, the usual suspects. From the top-ranked Toyota Camry and Honda Accord and six of their midsize rivals to the Toyota Corolla, Honda Civic, and five of their compact rivals, America’s most popular cars in September weren’t surprising.

The Camry expanded its year-to-date lead over the Accord to 36,888. And amidst talk of an effort from Ford to oust the Camry next year, Toyota’s Camry outsold the Fusion by nearly 12,000 units in September alone. It comes down to production capacity, transaction prices, incentives… and reputation. Regardless of why consumers choose the Camry at such a furious rate, it is most certainly the most common car in America.

Most obvious in that group of eight? The two leading compacts, Toyota’s Corolla and Honda’s Civic. The Ford Fusion, Chevrolet Malibu, and Dodge Charger were Detroit’s big-volume cars with big increases.

Historical monthly and yearly sales figures for any of these best-selling cars can always be accessed through the dropdown menu at GCBC’s Sales Stats page, and for those not viewing the mobile version of this site, near the top right of this page, as well. GoodCarBadCar has already published the list of America’s best-selling trucks and best-selling SUVs in September.