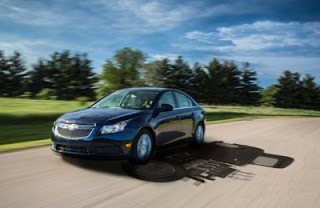 Although Ford managed to claim the top spot on the pickup truck and SUV leaderboard in June 2013, its best-selling car, the Ford Fusion, sold less often this June than last and consequently fell to seventh spot on this list of America’s 20 best-selling cars. The Fusion ranked fifth a month ago and sixth a year ago.

Top spot once again belonged to the Toyota Camry, which grew its year-to-date lead over the Honda Accord by 4193 units. With half of 2013 complete, the Camry is now nearly 21,000 units ahead of the Accord. It’s a surmountable lead, but one that’s unlikely to be surmounted.

Tops among small cars and Detroit passenger car nameplates – and second overall in June – was the surging Chevrolet Cruze. The Cruze pipped its nearest rival, the Honda Civic, by 3147 units. Through six months, the Toyota Corolla (with Matrix in tow) leads the Civic by just 268 sales. The Corolla, the second of three Toyotas on the list, held steady in sixth spot.

The other Toyota? That’d be the Prius, which landed in 14th spot. Factor in the Prius C and Prius V, and the Prius Family would fall in just ahead of the Hyundai Sonata with 21,079 sales.

Historical monthly and yearly sales figures for any of these models can always be accessed through the dropdown menu at GCBC’s Sales Stats page, and for those not viewing the mobile version of this site, near the top right of this page, as well. GCBC has already published rankings for dozens of different brands and 14 different trucks and 20 SUVs and crossovers. This list is responsible for displaying the 20 best-selling cars in America from June 2013. In a few short days, we will also publish complete June and year-to-date rankings for all passenger car nameplates, as was done in May.