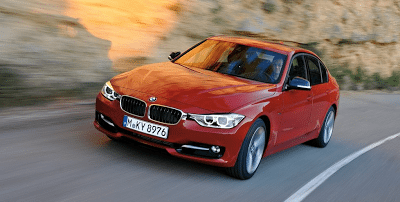 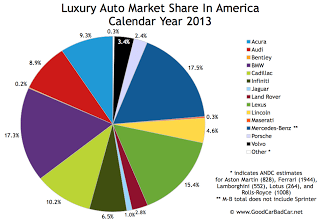 Lexus’s RX slotted in between the German pair with 103,920 sales. All three podium placing cars, in addition to the next-best-selling Lexus ES, Mercedes E-Class, and BMW 5-Series, sold more often in 2013 than they did in 2012.

In all, the list of America’s 15 best-selling premium brand vehicles includes seven utility vehicles, two of which sold less often in 2013 than in 2012. (BMW X5 sales plunged 66% in December, dragging down its calendar year total.) Seven brands are represented in the top 15.

Lincoln was the highest-selling premium brand to miss out on landing an individual model on the list of top sellers. Lincoln sold 32,361 MKZs and 23,913 Edge-based MKX crossovers.

There’s perhaps no more obvious omission than Cadillac’s CTS, sales of which tanked in 2013 as we approached the arrival of the all-new, more upscale CTS sedan. The CTS ranked tenth in 2012, behind the Acura MDX; ahead of the BMW X5 and Audi A4 family. Cadillac’s top seller in 2013 was the 15th-ranked ATS, which has, as should’ve been anticipated, a middle-rung player in the entry luxury sports sedan category.

Source: Automakers & ANDC
Red font indicates year-over-year declining sales
$45,000 USD (before delivery) is an arbitrary borderline, but if GCBC was to follow this system of designating only expensive vehicles as luxury vehicles, adding approximately $15,000 to the average new car transaction price seemed like a fitting place to begin. Plenty of less expensive vehicles with specific models feature prices above $45,000 – M, RS, and AMG models come to mind, specifically – but in the case of the second list, we know that none of the registrations were of cars priced at $32,550, as would be the case with the new BMW 320i, which costs less than a Honda Accord V6 Touring. The biggest problem with a $45,000 minimum price of entry? Cars like the Cadillac XTS, which starts at $44,075.
^ The lineup formerly known as the Infiniti G was also joined by 17,816 Q50 sales in 2013. 30,256 Infiniti G sedans were sold in 2013.
* BMW USA, not GoodCarBadCar, has chosen to combine sales of the 3-Series and 4-Series. A4 sales include the Allroad. Audi also sold 18,664 A5 coupes and convertibles in 2013.
Cadillac’s new CTS – 32,343 2013 sales – now starts at $45,100, but the lingering CTS Coupe is a sub-$40K car, and the wagon starts at $42,195.