The Chrysler Group continues to sell more minivans than any other automaker in the United States. Dreadful year-over-year drops posted by the Chrysler Town & Country and Dodge Grand Caravan presented an opportunity for the Toyota Sienna to appear as the dominant minivan player.

Truthfully, the Chrysler/Dodge duo remained ahead in July 2011. As individuals, however, both were smoked by the Toyota Swagger Wagon, sales of which improved 2.3%. Grand Caravan sales slid 16.4%; Town & Country sales were down 19.5%. At this point last year the Chrysler duo was ahead of the Sienna by 73,216 minivan sales through seven months. Through July of 2011, the Chrysler minivan pair is ahead by just 50,601 sales.

This is sort of like criticizing the Brazilian soccer team when its margin of victory over the Canadians is three goals instead of five.

America’s Top 10 Best-Selling Trucks in July 2011 have already been tabled, but the chart below explores the leftovers in addition to the dominant leaders.
Of the eight full-size trucks (including the Avalanche and Escalade EXT) attempting to find buyers in the United States in July, only the Dodge Ram and GMC Sierra reported year-over-year improvements. Worst off was the Chevrolet Avalanche, down 20%. The Texas-built Toyota Tundra posted a 15.6% loss. Sales of the Mississippi-built Nissan Titan fell 14.9%. Cadillac Escalade EXT sales can be seen wrapped into the Escalade’s total versus other large luxury sport-utilities here.
Among smaller pickup trucks, Ford Ranger sales accelerated at a 23% clip as deals on remaining Rangers make for awfully cheap truck acquisitions. Chevy Colorado sales rose 44.4%. It was the ninth-best-selling truck last month. Sales of its twin, the GMC Canyon, jumped 122.5%.
Together, sales of the two GMT355 pickups reached 4591 in July, not enough to move past the Nissan Frontier (up 21.8%) in overall volume, but some way better than the 2834 sales the twins achieved in July 2010. 4591 sales still seems pitiful compared to the Sierra/Silverado’s figures… which are ten times higher. 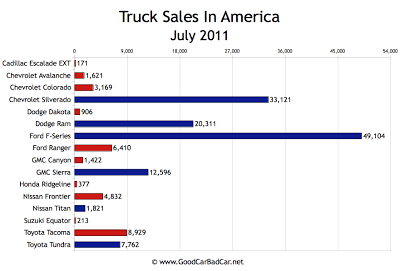