Together, the Chevrolet Equinox and its GMC Terrain fraternal twin, found 22,407 American buyers in September 2011. That’s more than 2000 sales beyond the class-leading and overall best-selling SUV in America, Ford’s Escape.

Speaking of the Escape, Ford announced this week that the company would forego the V6 option on the next Escape (set to be revealed at the Los Angeles Auto Show) while offering a basic four-cylinder and two turbocharged versions, a 1.6L and 2.0L. The smaller EcoBoost turbo is said to achieve better fuel economy than the current Escape Hybrid, a vehicle which will likely disappear.

If the new Escape looks anything like the Vertrek Concept from the last Detroit auto show, Ford will undoubtedly have a hit on its hands. But will they be able to keep the price as low and the incentives as high as they are on the current Escape? Let’s be honest, the current Escape is not top-of-the-class material, but it sells in vast numbers both in the United States and Canada because you probably won’t pay as much in monthly payment terms.

As for some of the one-on-one battles from the small SUV class’s September 2011 U.S. sales results, the Nissan Juke beat the Mitsubishi Outlander Sport by 1798 sales; the Mini Countryman was 305 units behind the Mitsubishi. Hyundai’s Tucson out-sold its surging platform-mate, the Kia Sportage, by 135 sales. Meanwhile, Mazda CX-7 sales jumped 91% in September – the CX-9 was up 74%.. See it all in the small SUV sales chart below, scroll down for a look at midsize and large sport-utes and crossovers.

General Motors has been doing a much better job of late differentiating their platform sharers. The Equinox and Terrain are decent examples of that fact, but the company’s larger Lambda platform products prove the point with ease. Judging by the strong sales numbers, the buying public agrees.
Sales of the curvy Buick Enclave rose 10% in September (and are up 10% year-to-date); the more conventional Chevrolet Traverse was down slightly (0.5%) but is up 7% this year; and sales of the utilitarian-looking GMC Acadia jumped 15% in September and are up 25% year-to-date. Together, the three Lambda crossovers combined for 18,028 September 2011 sales. Sales were spread rather equally between the three: 27% for Buick, 29% for the GMC, and 44% for Chevrolet.
GM’s sales may sound strong, and they are, but you’ll spot 25,100 Ford sales in the chart below. There were three Fords in the top six of September’s Top 10 Best-Selling SUVs In America list, but just one GM product in the top 10. Ford Explorer sales skyrocketed upward with a 204% year-over-year bump. Mitsubishi Endeavor sales jumped 82%.
The Suzuki XL7 wasn’t able to make that list. XL7 sales slid 86%. To one. 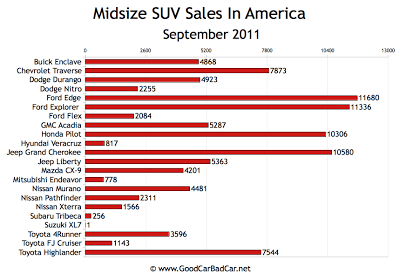 Of the 25,743 sport-utility vehicles in the large SUV sales chart below, 77% were GM products. The Ford Expedition’s share of the jumbo market was 13.5%. Chevrolet Suburban sales shot up 83% in September; Tahoe sales rose 63%. The GMC Yukon XL was up 67%; sales of the regular-wheelbase Yukon jumped 45%.
Sales of the all five domestic SUVs in the chart below improved year-over-year, then, and are also better in the first three quarters of this year than the first three quarters of last year. Nissan Armada sales also improved in September, but the Armada is down 6% year-to-date. Sales of the Toyota Sequoia fell 29% in September 2011 and are off last year’s pace by 5% in the first nine months of this year. 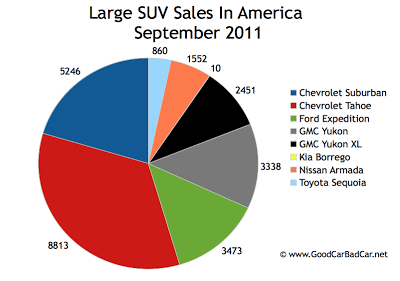