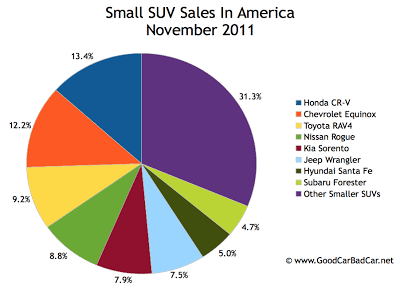 General Motors sold 20,590 copies of their Chevy Equinox/GMC Terrain twins in the United States in November.  Sales of both the Chevrolet Equinox and GMC Terrain were down from November 2010 levels. Ford sold 21,823 Escapes, up 46% year-over-year. Four Hyundai and Kia alternatives – the Santa Fe, Sorento, Sportage, and Tucson – found 23,117 American buyers in November 2011.

Apart from the defunct Honda Element, no mainstream small SUV or crossover posted a worse drop than the Nissan Juke, sales of which tumbled 26% from its early effort last November. No small utility vehicle reported a greater percentage increase than the Jeep Compass, sales of which multiplied ten times.

After the jump you’ll find November sales tables and market share charts for midsize and large SUVs. Monthly and yearly sales figures for all these SUVs and every other current model on sale can be accessed through the dropdown menu in the top right of this page. 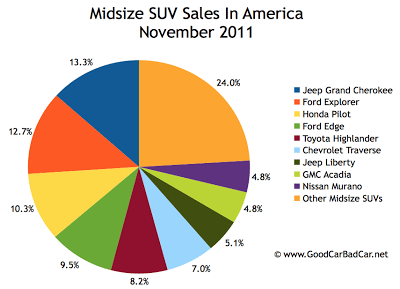 Ford’s three mid-range utilities combined for 24,736 sales in November. Sales of the Edge and Flex were down (the Flex is down 21% year-to-date) but Ford reported a 217% increase in Explorer sales, making November the new Explorer’s second best month so far. Not since May has Ford managed to sell more Explorers in a single month. 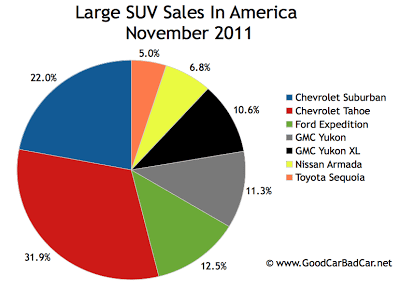 Three of seven jumbo truck-based sport-utility vehicles on sale in the United States reported year-over-year increases better than the market’s overall improvement. Another, the GMC Yukon XL, was up 12.5% in November 2011. Sales of the Nissan Armada were up 2%. The Ford Expedition’s 0.7% drop wasn’t even that bad. In fact, it wasn’t bad enough to drop the Expedition below third-in-class status.

Armada sales are down on year-to-date terms, however, as are sales of the Toyota Sequoia. Sales of the Toyota fell 9% in November. The overall jumbo SUV market was worth 2.6% of America’s new vehicle market last month.