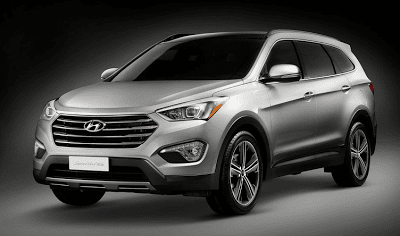 7.7% of all the new vehicles sold in the United States in March 2012 were from a leading group of America’s top-selling small SUVs and crossovers. The same group – formed by the Honda CR-V, Ford Escape, Chevrolet Equinox, Toyota RAV4, and Nissan Rogue – were America’s five best-selling utility vehicles in March. Collectively, sales of these five cute-utes rose 18.4% year-over-year even as the overall market as a whole increased 12.7%.

Not all small utilities were more successful this March than last. The Escape, America’s second-best-selling SUV, slid 5.4% last month. Sales of three Hyundai/Kia products, the Tucson, heftier Sorento, and Sportage fell 6.9%, 6.9%, and 22.7%, respectively. The soon-to-disappear Mazda CX-7 plunged as the CX-5 stepped in as a more affordable and much more efficient crossover. The same thing could be said of Mazda’s Tribute. Sales of the Mini Countryman, Mitsubishi Outlander, and Subaru Forester were all in decline as well.

Among larger and/or more expensive SUVs, GM’s Lambda trio was down 16.1% in the lead-up to the release of updated versions. March was also the sixth consecutive month in which Toyota has reported a year-over-year decline in 4Runner sales.

Finally, the biggest truck-based sport-utility vehicles didn’t just fail to keep pace with the rest of the automobile market in March 2012; they couldn’t even maintain last year’s selling rate. Sales of the six jumbo SUVs were down 11% in March. Only the Toyota Sequoia (up 25 units) and the Good 12-winning Chevrolet Suburban (up 694 units) managed to make gains.

Monthly and yearly sales figures for these models and every other vehicle currently on sale in North America can be accessed through the dropdown menu at the top right of this page. After the jump you’ll see detailed March and Q1 sales figures for more than four dozen mainstream SUVs. Click any of the accompanying charts for a larger view. 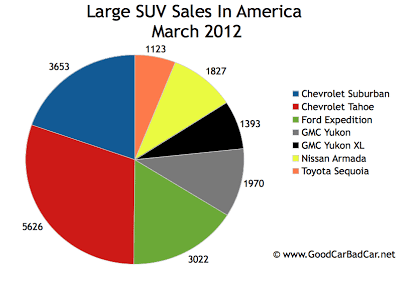