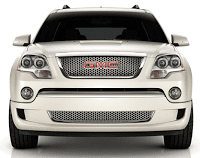 High fuel prices? Consider the market acclimatized, sort of. Horrendous economic circumstances? Well, that simply presents us with a very different U.S. automotive market than the one we came to know a decade ago.

General Motors is still selling really big sport-utility vehicles, but some of them are called crossovers. Some of those crossovers are really big. GoodCarBadCar.net labels these three Lambda platform utilities as midsize mainly because they’re not Suburbans and Tahoes and Yukons. And boy was General Motors selling plenty of these three midsize crossovers last month. The Buick Enclave was up 22% in July; GMC Acadia sales rose 87%; the Chevrolet Traverse jumped 43%. As a highlight, both the Acadia and Traverse were on July 2011’s list of the 10 best-selling SUVs in America.
The three GM crossovers combined for 30,852 sales last month. Contrast that an otherwise impressive 22,020 Ford sales in the chart below. Ford reported a 4% year-over-year improvement in Edge sales; a 108% jump in Explorer sales; and a 24% decline in Flex sales.
What you definitely won’t find when scanning a recent list of best-selling SUVs is any of the vehicles from the large SUV sales chart below. Americans still love a jacked-up ride height, but barely a sliver of the market wants that jacked-up ride height in a body-on-frame V8-engined behemoth. Only 1.96% of the July 2011 U.S. new vehicle market was made up by jumbo sport-utes.
Yep, that means the Ford Escape – by itself – sold in greater volume than all the jumbo SUVs combined. The Escape is easily America’s best-selling utility vehicle and best-selling small utility vehicle, out-selling larger car-like utilities like the Ford Edge and Hyundai Santa Fe by wide margins and manhandling more closely-aligned rivals like the Honda CR-V and Nissan Rogue.
Small SUVs, a loosely-defined GCBC term that takes in two and three-row sport-utes and crossovers as small as the Mini Countryman and as large (and cheap) as the Kia Sorento, are wildly popular in the United States and around the world. Eating into the midsize sedan category, the midsize SUV category, and (with vehicles like the Nissan Juke) even the sports compact segment, small SUVs are an essential part of every manufacturer’s model lineup.
To what extent? Some 160,000 small utility vehicles were sold in the United States in July 2011. Most of the nameplates didn’t even exist 15 years ago. Some, like the Juke, Countryman, Outlander Sport, and Journey, are newer additions. Yet sales have doubled in the time between July 2003 and July 2011 despite the fact that the overall market was 452,690 sales stronger eight years ago. 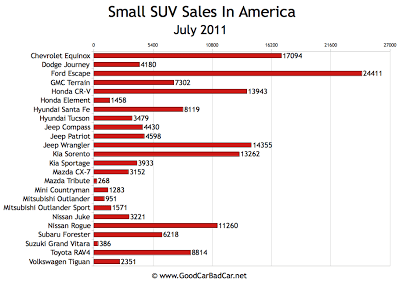