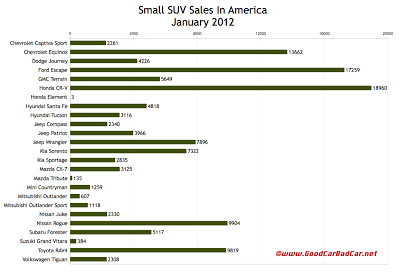 As more and more information is added to a typical GoodCarBadCar.net post (six charts and three tables in this instance), there’s less and less need for words. So, just pay attention to a few simple facts before you check out the January 2012 details on America’s loosely-defined small, midsize, and large SUV segments.

No small utility vehicle reported a more significant drop than the Honda Element last month. But among vehicles still in production, no vehicle posted a worse decline than the Nissan Juke. Its 25% drop was closely followed by the Suzuki Grand Vitara’s 22% slide. No small SUV reported a greater year-over-year gain than the Mini Countryman. Of course, the Countryman was just going on sale at this time in 2011, so volume was small. Therefore sales were expected to be significantly better this year. Aside from the Mini, the Jeep Compass’s 64% jump and the Volkswagen Tiguan’s 50% increase stand out.

Moving to the larger and more expensive SUVs/crossovers, the awards for worst and best percentage changes go to the dying Mitsubishi Endeavor and the new-last-year Dodge Durango. Exclude those two vehicles as well as vehicles of the same ilk and the awards are earned by the Toyota FJ Cruiser and the Jeep Liberty.

Finally, among the big bruisers at the bottom of this post, make way for the GMC Yukon XL, down 30% in January, and its twin, the Chevrolet Suburban, up 25% in January.

All charts in this post can be clicked for a larger view. Check out the dropdown menu at the top right of this page for detailed monthly and yearly sales figures for all nameplates currently on sale in North America. After the jump, there’s a boatload of U.S. sales info for mainstream SUVs in January 2012. 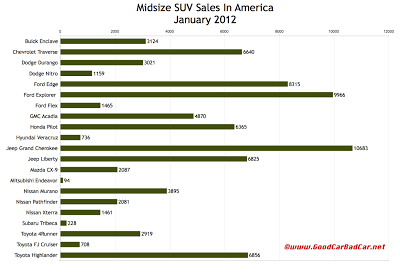 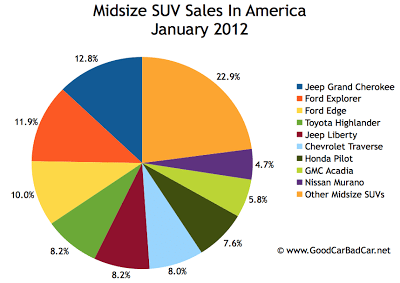 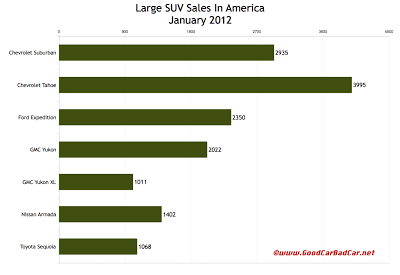 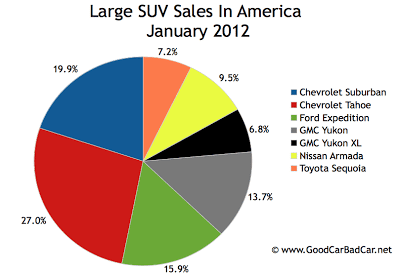