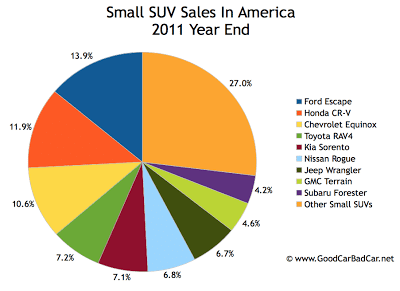 Examining America’s December SUV sales situation would be interesting… if only we didn’t have 2011’s year end results. With that in mind, let’s look at the smaller stuff, then skip the jump to see the midsize and large SUV sales results. Size classifications are, as always, just a guide.

The fleet-only Chevrolet Captiva Sport found more rental company buyers in the latter stages of 2011 than the Suzuki Grand Vitara found total buyers in all of 2011. The Chevrolet Equinox, of course, was one of America’s most popular SUVs or crossovers of any size or type…. U.S. Dodge Journey sales remain low in comparison to its direct domestic rivals, but the Journey AVP aims to change that, just as the basic $18,995 Journey made the Dodge so popular north of the border. The Journey is more popular than either the Jeep Compass or Patriot – though only barely – but the Jeep Wrangler was wildly successful in 2011 as sales jumped 30%… More than just America’s most popular SUV, the Ford Escape was America’s fifth-most-popular vehicle overall… Combined, the GMC Terrain and Chevrolet Equinox were significantly more popular than the Ford Escape, with 276,453 sales… Honda sold 19 CR-Vs for every Element sold in America in 2011. The Element, sadly, is now dead… Between the Santa Fe, Sorento, Tucson, and Sorento, Hyundai/Kia sold 299,321 SUVs/crossovers in 2011. That’s a lot… A bad December wasn’t enough to stop the Mazda CX-7 from posting its second-best year yet. 2011 was the Mazda CX-9’s best year to date… Without the Mini Countryman, Mini sales were down severely in 2011… The Outlander Sport is now Mitsubishi’s second-best-selling model. A safe guess says Outlander Sport sales rise in 2012… Nissan offers a huge range of SUVs and crossovers in America, from the tiny Juke to the gigantic Armada. The most popular of the bunch is the smallish Rogue, America’s 26th-best-selling vehicle… With rising Outback sales, the Forester failed to match 2010’s volume. December sales, however, rose 7%… Did RAV4 sales slide because of Japan’s earthquake/tsunami/nuclear disaster triad or because more consumers were tiring of the tailgate’s awkward opening direction? Sales increases and decreases only mean so much. RAV4 sales were down 23%; Tiguan sales were up 24%. Toyota, however, sold five times more RAV4s than Volkswagen sold Tiguans.

Scroll past the jump for a look at midsize and large SUV sales results from December 2011 and the 2011 year end numbers. 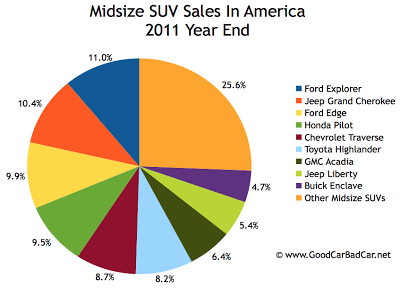 244,811 Lambda platform SUVs were sold to Americans in 2011. Each of the three big utilities reported year-over-year increases, but only the GMC Acadia’s 16% jump outpaced the market’s 10% climb… Pay little mind to the Dodge Durango’s gigantic year-over-year leap – the Durango did alright in 2011 but was still just the Jeep Grand Cherokee’s sidekick… Between the Edge, Explorer, and Flex, Ford out-sold GM’s Lambda trio by 40,000 units… Pilot sales were better than anything Honda has achieved with the Pilot since 2007, 39% better than 2009 in fact… Hyundai Veracruz sales were up in 2011, that’s true. But up to what? The Veracruz was less popular than the Mitsubishi Endeavor and Toyota FJ Cruiser… Likewise, Subaru Tribeca sales increased in 2011. Its 13% increase was better than what the overall market achieved, but the Tribeca was still America’s third-worst-selling vehicle… Speaking of the FJ Cruiser, sales plunged in 2011. The FJ’s 10% drop came at the same time as another off-roader, Nissan’s Xterra, slid 11%. The Jeep Wrangler, remember, was up 30% to 122,460. Vive Toledo? Four Toyota brand vehicles reported year-over-year increases in 2011. Riding the wave along with the Avalon, Sienna, and Tacoma was the Toyota Highlander. 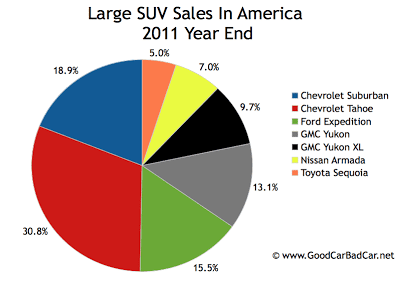 Kia sold 429 Borregos in 2011. We didn’t bother tabling the defunct Borrego’s year end results. Apart from the two Japanese entries, sales of big SUVs were better than they were last year. For the Suburban, this meant sales were better than they’ve been since 2008. Not since 2008 have Chevrolet Tahoe sales been this high. Yes, GMC Yukon sales were lower in 2010 and 2009 but higher in 2008. GMC Yukon XL sales in 2011 were down just 4.5% from 2008 levels. And as you might’ve guessed, Ford Expedition sales haven’t been this high since 2008.