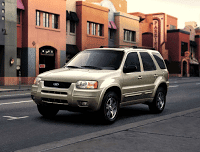 It’s hard to imagine that back in the late 90s when Ford product planners were thinking of selling a small sport-utility vehicle in the United States they thought they’d be selling pretty much the same small SUV more than a decade later. Not only are they selling the same vehicle – aside from new engines, slight restyling, and a better interior – they’re selling it at a faster rate than any other automaker can manage with their own small SUVs and crossovers.

Ford Escape sales jumped 39% to 20,607 in August 2011. That’s 24% more than the next-best small SUV, Chevrolet’s Equinox. This is where we acknowledge the presence of the GMC Terrain, an Equinox twin. The two GM crossovers combined for 24,481 sales last month. There is a Mercury Mariner no more but Ford Motor Company sold 2228 Mariners in August of last year. 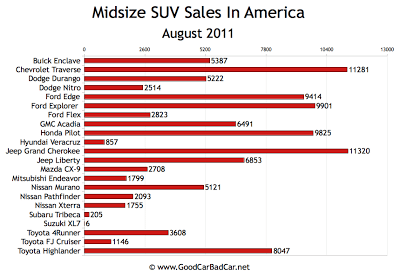 Sales of GM’s Lambda platform topped 23,000 in August. The Chevrolet Traverse led the way on 44% gains. GMC Acadia sales were up 54%. The Buick Enclave was up 17%.
On an individual basis the leader in the chart above is very clearly the Jeep Grand Cherokee, sales of which jumped 77% in August 2011. Consider the $7000-cheaper Kia Sorento a midsizer (it sure isn’t when you base your understanding of segments on price) and the Jeep is the leader no longer. As you can see in the chart at the top of this post, Kia sold 13,573 Sorentos last month. 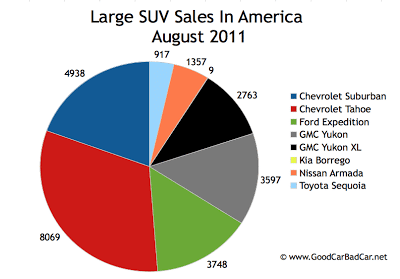 General Motors sold 19,367 of the 25,398 jumbo SUVs acquired by American buyers in August. 42% of those GM large SUV sales can be seen in the Chevrolet Tahoe’s red slice of the pie chart above.