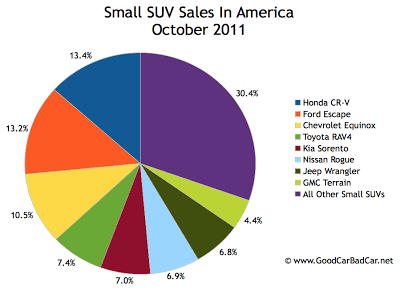 Seven out of every ten smallerish sport utilities and crossovers sold in America last month were tallied up by the eight most popular smaller SUVs/crossovers. That’s one-third of the nameplates grabbing more than two-thirds of the sales. The fact that Hyundai’s Santa Fe and Kia’s Sorento are included on the small side of the ledger skews this a bit, but they’re both so inexpensive that their natural rivals aren’t necessarily bigger SUVs like the Honda Pilot.

Aside from the all-new-at-this-time-last-year Mitsubishi Outlander Sport, no small utility vehicle reported a better year-over-year increase than the Jeep Compass. October 2011 Compass sales totalled 5179, a 566% improvement from October 2010. Apart from the dying Mazda Tribute and Honda Element, the Subaru Forester’s 19% drop was exceeded only by the Toyota RAV4 and its 27% plunge.

The Mitsubishi Endeavor’s 50% year-over-year drop is easily explained by its defunct status. Hyundai Veracruz sales slid 29%. Through ten months, Ford Flex sales are 22% off last year’s pace. Positively speaking, Ford Explorer sales jumped 225%, and the Pilot was up 53% in October. The Dodge Durango’s 6562% jump simply manifests the deflated state of October 2010’s Durango sales total. These numbers and many more can be viewed in the exhaustive tables of SUV sales stats after the jump.

Large SUVs are far from the dominant U.S. market force they were just six or seven years ago. Compared with last year, however, America’s five mainstream truck-based sport-utility vehicles are much, much healthier. October was a down month for both the GMC Yukon and Yukon XL, but like the Chevrolet Tahoe, Chevrolet Suburban, and Ford Expedition, GMC jumbo SUV sales in the first ten months of 2011 have improved.

As was the case with GCBC’s changed small and midsize SUV charts – a change which is explained here  – you’ll find more info for October and 2011’s SUV sales figures after the jump. 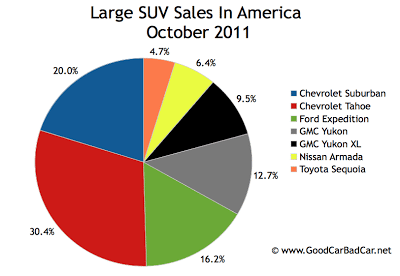