In its first month on sale, the Hyundai Veloster was distinctly more popular than the Honda CR-Z. Sales of the two-seat Honda slid 57% in September 2011; falling 28% from August levels. Sales of the Volkswagen GTI far outweighed those of the Veloster… but the Veloster’s just gettin’ goin’. GTI sales jumped 43% in September, however, and accounted for 48% of all Golf sales. More popular than the Volkswagen GTI, the Scion tC reported a 79% improvement compared with September 2010’s 981 U.S. sales.

Yet, despite what at first appear to be relatively healthy numbers for the Veloster, GTI, and tC, these three vehicles collectively aren’t as popular as the Ford Mustang. Or the Chevrolet Camaro. Mustang sales slid 12% in September. The Camaro was up 11%. 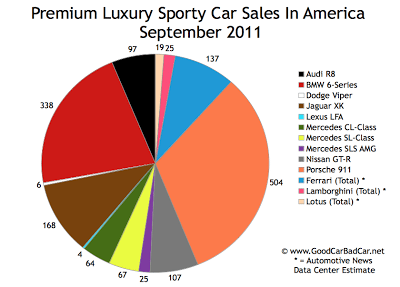 The Audi R8 was down, but only slightly, by six units. The Mercedes-Benz SLS AMG was down 29%, or ten units. Still, there were 122 Audi R8s and Mercedes SLS AMGs sold in America last month, and America’s a better country because of it.