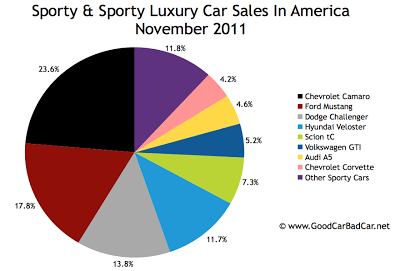 No still-active sporting car posted a worse U.S. sales decline in November than the Honda CR-Z. Sales of Honda’s semi-sporty hybrid hatch plunged 70%, enough to land the CR-Z on America’s worst-selling car list. The defunct Mazda RX-8 didn’t even fall as hard. The Porsche Boxster, with just 54 sales in November, lost more than half its November 2010 volume.

Compare the Boxster’s November U.S. sales performance with the Audi TT’s. Although TT volume was anything but lofty, sales more than doubled to 164, three times what Porsche mustered with the Boxster, a car which Porsche is struggling to supply in proper numbers. Still inside the VW Group, sales of the Volkswagen Eos jumped 53% in November. Elsewhere among the Germans, Mercedes-Benz SLK sales nearly doubled from 110 in November 2010 to a class-leading 206 in November 2011.

Monthly and yearly sales figures for all these models, both Canadian and American, can be found by accessing the dropdown menu in the top right of this page. Last month’s version of this post can be viewed here. Keep scrolling past the jump for a look at detailed November 2011 sales figures for costlier sporting automobiles.


Eleven times more BMW 6-Series coupes and convertibles were sold in the United States in November of this year than in November 2010. That’s a fairly serious improvement, as 6-Series sales last month exceeded the numbers put up by the significantly less premium Nissan 370Z and many other sports cars which should easily out-sell the big BMW.

The 6-Series’ most obvious rival is the class-defining SL-class from Mercedes-Benz. For every SL sold in America in November there were seven 6-Series BMWs sold. Sales of the SL550 and its AMG brethren collectively fell 53% last month. Mercedes-Benz also reported a decline in CL-Class sales, down from 127 to 79. The new $196,100 SLS AMG Roadster certainly benefited Mercedes-Benz’s bottom line. November sales of the SLS range jumped 369% to 169, better than the joint CL-Class/SL-Class effort.

Source: Manufacturers & ANDC
Red font indicates declining year-over-year sales
Clearly GoodCarBadCar is not suggesting that the cars in the two tables above are all direct competitors. Establishing categories among cars as unique as even the Audi TT and Porsche Boxster has never pleased a single reader, so cars have been lumped together so you can simply see how buyers looking for sports cars, roadsters, hot hatches, convertibles, GTs, and wanna-be sports cars spend their money. Greater categorization of cars would only lead to problems that automakers create by not isolating model-specific sales figures: we don’t know how many M3s BMW has sold or how many Civics are Si models, for example. The numbers we do have are listed above.