Sales of the Mercedes-Benz SLK shot through the roof in July as the third-generation Benz roadster reached American shores. 1758% gains aren’t easy to come by for cars which have been on sale for 15 years, but the SLK’s dismal performance in July 2010 enabled ridiculous year-over-year improvements for the smallest Mercedes-Benz convertible.

In comparison with its direct rivals the SLK appears even more wildly successful. Yes, it’s early, and many potential second-gen SLK buyers may have been waiting for the new car to show up, producing what may have been something of a July bubble. However, Mercedes-Benz reported 156 more SLK sales than its combined German sports car rivals could muster. The Audi TT was up 7.2%; the BMW Z4 was up 92.4%; and Porsche’s Boxster/Cayman duo was down 16.2%. Even the Nissan 370Z couldn’t come close with its 44% plunge to 550 sales.

Mercedes-Benz sells the odd ultra-expensive sports car, as well. An SL-Class Benz, the SLK’s big brother, will set you back at least $103,650, but in July 2011, many buyers looked elsewhere. Mercedes-Benz SL-Class sales fell 52.1% to just 93.
While that’s not a bad figure, one which looks fine compared to Mercedes-Benz CL-Class sales numbers or the SLS AMG’s 49 sales, it wasn’t good enough to beat the Jaguar XK (down 51.4%), the BMW 6-Series (down 43.3%), or the indomitable Porsche 911 (down 19.5%). Starting to see a trend here with the word “down”? The aforementioned CL-Class suffered a 75.8% decline in July. Sales of the Nissan GT-R dropped 34.9%. It’s no surprise to see the Cadillac XLR and Dodge Viper in the throes of degeneration.
That leaves us with the Audi R8, sales of which rose 57.7% from 52 in July 2010 to 82 in July 2011. Yep, it’s ultra-rare, but not nearly as exclusive as it was this time last year. 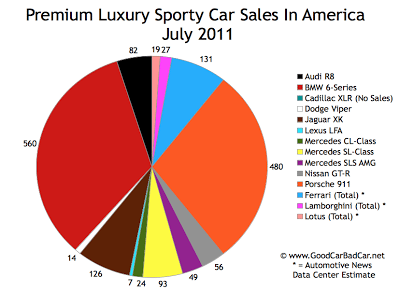