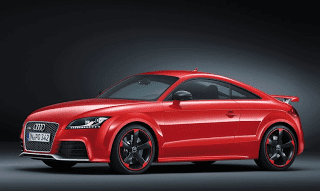 In a segment filled with drastic fluctuations and tastes which change faster than the tides, it’s not a shock to see significant year-over-year gains and losses. For example, sales of the Audi TT jumped 88% in January 2012. Meanwhile, sales of the Porsche Boxster slid 74% from January 2011’s 186 to January 2012’s 48.

The Chevrolet Camaro was the most popular muscle car in America in January, just as it was in 2011 as a whole. Ford must start working at overcoming a 1973-unit deficit in order to end 2012 on a higher note than it began.

U.S. sporty car sales numbers now include figures for Subaru’s WRX family and for Mini’s ugly little Coupe. WRX numbers slid to 710 in January. The Coupe out-sold the Mini Convertible by 20 units to avoid being Mini’s least popular sub-model. The Hyundai Veloster remains popular, out-selling the Scion tC by nearly 400 units in January. Volkswagen’s GTI found four more buyers than did the model on which it’s based, Volkswagen’s Golf.

After the jump you can check out numbers for high-end sports cars, GTs, and coupes with an accompanying chart, as well as the first table which shows detailed January 2012 sales data for the cars in the above chart. Sales figures for all these models – monthly and yearly, Canadian and U.S. – can be accessed through the dropdown at the top right of this page or on the Sales Stats page. 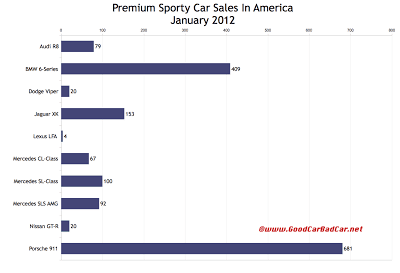