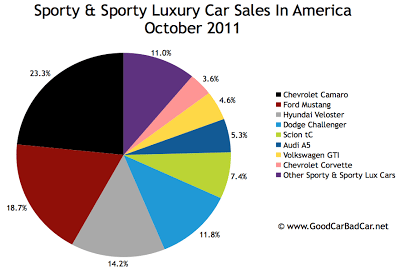 Home
All Vehicle Rankings
Sporty Car Sales
The sporty car graph GoodCarBadCar publishes twice per month – once for U.S. sales and once for Canadian sales – offers up a mixed bag of markets inside one overarching pie chart. There are muscle cars; they’re the most popular. There are German roadsters, Asian hot hatches, and a Swedish convertible. The Mini Cooper and Fiat 500 are charted elsewhere. The Honda Civic Si, BMW M3, and many sports sedans have their sales wrapped up in the core model’s numbers, as the Civic Si’s are here.

The point is, although Chevrolet’s 23.3% share of the sporty car segment in October 2011 sounds good, the Camaro’s true share of its genuine market is actually much higher. Americans purchased or leased 14,114 new American muscle cars in October. 43.4% of those Camaro/Mustang/Challenger acquisitions resulted from an attraction to the Camaro. There are many more details on the sales of sporty cars and sports cars and roadsters and hot hatchbacks in the table below. 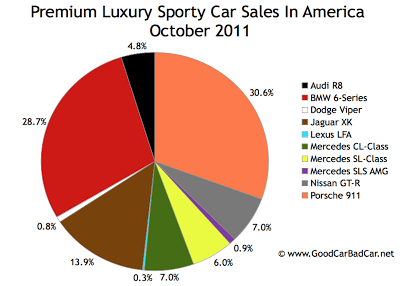 Sales of BMW’s 6-Series and Nissan’s GT-R shot through the roof in October. This occurred during the same period in which BMW Z4 sales plunged and Nissan 370Z sales dove for the basement. The 6-Series came within 28 sales of beating the Porsche 911.

Speaking of the generally unbeatable Porsche, 911 sales fell 17% in October. The next-gen 911 will soon be upon us. Many customers would therefore be reluctant to acquire the now out-dated 997-gen 911.

A 17% drop would certainly have been an easier pill for Mercedes-Benz to swallow with its SLS AMG. Sales of the Mercedes-Benz’s exotic-looking supercar fell 78% instead. Through ten months, the SLS AMG is up 13%, though sales of the lower-rung SL-Class are off 38%. All these numbers and more can be viewed in the table at the end of this post.