Ignore the top-selling Chevrolet Camaro and its Detroit counterparts – the Ford Mustang and Dodge Challenger – for a few moments. Concentrate instead on the Volkswagen GTI, the sporty version of Volkswagen’s run-of-the-mill Golf hatchback. The GTI is handsome. It’s also a pleasure to drive, not terribly expensive (and not as inexpensive as some potential rivals) relatively fuel efficient, and very, very important to Volkswagen in the USA.

When not viewed as just another part of the Golf family, the GTI was Volkswagen Of America’s fifth-best-selling vehicle in August 2011. The GTI will likely fall into sixth spot once the Passat kicks into gear, but for now, the GTI is very nearly as popular as the regular Golf. Just like the Golf, the GTI is sold in 3-door and 5-door bodystyles.

But where the Golf offers a 2.5L inline-five or a 2.0L turbodiesel, the GTI is sold with just one engine, a couple transmissions, and very few colours. Options are limited. And yet Volkswagen Of America sold 1542 copies of the GTI in August. That’s just 152 behind the Golf. Year-to-date the GTI trails the Golf by fewer than 600 units. In terms of total sales, the GTI was worth 49% of the Golf’s volume in the first eight months of 2011; 48% in August.

Moreover, the GTI easily out-sold the Scion tC, Honda CR-Z, and all other sporty cars on sale in America – at least those which release their data separately. Honda doesn’t do that for the Civic Si nor does BMW for the M3. Oh, and the Camaro, Challenger, and Mustang cleaned the floor with the GTI. But still, it’s an important car, an image definer for Volkswagen and a fairly popular Volkswagen, too. GTI sales jumped 60% in August. 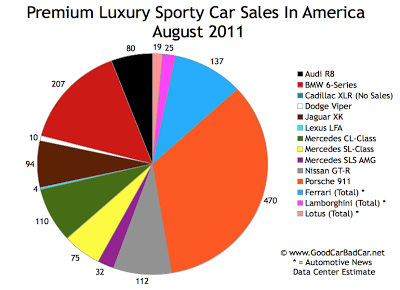 Among more expensive sports cars, sales of the Porsche 911 rose 25% in August. The 911 was still only Porsche’s third-most-popular model behind the Panamera (529 August sales) and the Cayenne (882 August sales). The Porsche is trailed by numerous rivals which collectively hinder its impact on America’s sports car market, but, as individuals, amount to a murmur.