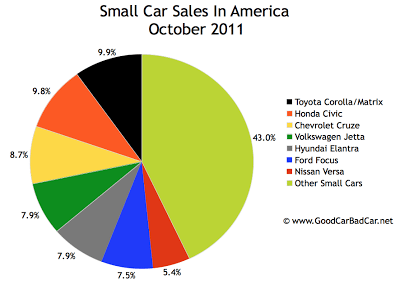 As you’ll see in the table below, more than 230,000 small cars were sold in America in October 2011. GoodCarBadCar has changed things up with October 2011’s charts and segment-by-segment breakdowns. The table below provides more info than any of GCBC’s charts ever have, and the market share chart above (click it to make it bigger) manifests the dominance of the best-selling small cars in the United States.

Back on the subject of the vehicles in this post, no currently marketed small car reported a decline worse than the Nissan Cube’s. It was bad enough to merit a spot on the Worst-Selling Cars In America list for October 2011. The Chevrolet Cruze and Volkswagen Beetle, not surprisingly, more than doubled up on last October’s volume.

With the dawn of a new Yaris, a rise in Toyota subcompact volume was predicted, but to this extent? At 6792 sales last month, the Yaris easily beat the Ford Fiesta, Honda Fit, and Hyundai Accent. Yaris reviews haven’t all been kind, indeed, reviews have rarely been kind, but as was the case with Volkswagen’s latest Jetta, the opinions of the mainstream automotive press were deemed meaningless. The Yaris, along with the Corolla, Matrix, Scion xB, and Scion xD, gathered up more than 25,000 buyers for Toyota in October.

America’s October 2011 small car recap is below. Simply click the above chart for a larger view.