U.S. Midsize Car Sales: Camry vs Accord vs Altima vs Fusion vs Malibu vs Sonata

Think the midsize car segment in the United States isn’t growing more competitive by the day? Back in the first half of 2002 Toyota sold 225,605 Camrys. The U.S. new vehicle market fell 25% since then. Camry sales, on the other hand, fell 53%.

On the flip side, you have the Hyundai Sonata. Hyundai only sold 34,777 of them in the first half of 2002. Since then, Hyundai Sonata sales soared upward at a 231% clip.

The Camry and Sonata are the extremes in a group that includes the six most popular midsize cars on sale in America. The competitiveness of this midsize class is easily seen at the far right of the chart below. By the end of June 2011, America’s six best-selling midsize cars were packed in very tightly. Chevrolet sold 122,783 Malibus in the first six months of 2011. Ford sold 131,686 Fusions. Honda Accord sales reached 137,146. Hyundai ranked sixth with the Sonata’s 115,014 sales. Nissan sold 131,842 Altimas. And Toyota was still number one with the Camry’s 147,469 sales.

Of course, things have changed in the last ten years. Toyota no longer offers the Camry Solara. Instead Toyota markets the Venza, a sort of tall, much better-looking Camry wagon. Hyundai has accelerated past two generations. We know that two generations for Hyundai isn’t like two generations for every other automaker. The old, old Taurus is no longer, more about which you can read after scanning the chart. The Altima was newly competitive in 2002 and is now pervasive. The Malibu royally sucked a decade ago. Finally, Honda gave up on clean lines in favour of unclean lines and then bloated lines.

Yeah, things have changed, but emphasizing that fact is only a means for excusing one automaker’s failures or celebrating another’s overstated success. It is what it is, a hugely competitive segment ruled by a fleet of commanders with one pacesetter but no supreme head. Click the chart for a bigger view and see for yourself. 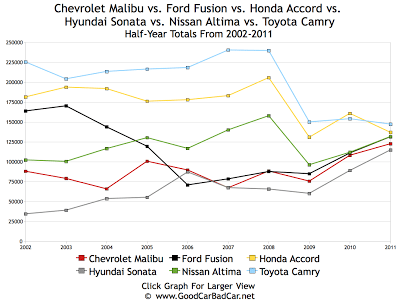