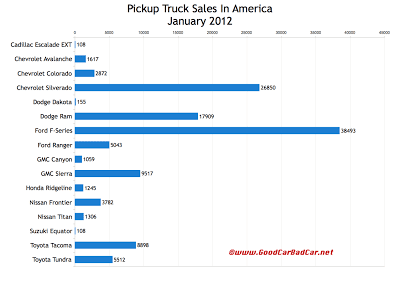 By January’s standards, the efforts of Japanese automakers to crack America’s full-size truck market was not successful. Only 5.5% of all trucks sold in January were Nissan Titans or Toyota Tundras.

The Ford F-Series was the best-selling truck in America in January, as usual. The top five were ranked earlier this month on GoodCarBadCar.

After the jump, it’s worth taking a look at the minivan segment, a category which grew just 1.1% despite the addition of an extra player, the Nissan Quest. The minivan category’s 1% growth in the came during a time in which the overall new vehicle market was up 11%. Keep that in mind when glancing at the sales figures for each of the eight vans listed or when, with a single click, enlarging either of the charts. There was not a single minivan in January’s list of the 30 best-selling vehicles in America.

Sales figures for those vans, these trucks, and every other vehicle currently on sale can be accessed through the dropdown menu at the top right of your screen or at the Sales Stats page. 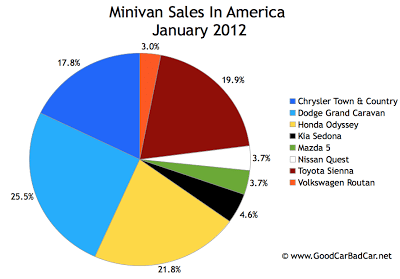