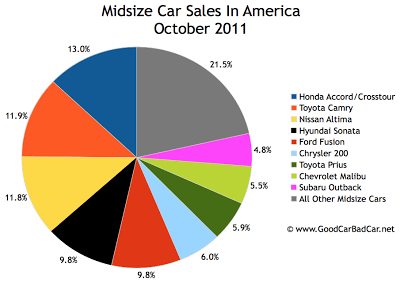 There’s news today that Honda Civic inventory in the United States is “virtually zero”, and sales which slid 6% in October go some way to proving that. One size category up, however, the Honda Accord sold well last month. The Accord was America’s best-selling car and sedan/coupe Accord sales were up 5.3%. Honda sold 1478 Crosstours in October 2011.

Clearly then, the Accord led the loosely defined midsize segment in October. Trailing the pack was the Suzuki Kizashi, sales of which fell 18%. In an off-shoot of the midsize sector – cars which are priced similarly but cater to a very different buyer – the Chevrolet Volt beat the Nissan LEAF. Sales of Toyota’s Prius were ten times stronger.

No car from the table below reported a worse year-over-year decline than the Honda Insight. Its 75% plunge steered the Insight straight toward the Worst-Selling Cars In America list. Chrysler 200 sales were 405% better than Chrysler Sebring sales from a year ago. Sound good? The Kia optima was up 429%. Not good enough? The Volkswagen Passat registered an 825% jump, something that wasn’t actually that hard to achieve. Volkswagen sold only 545 Passats at this time last year.

As you’ve probably already read in October’s U.S. small car post, GoodCarBadCar has changed things up with October 2011’s charts and segment-by-segment breakdowns. The table below provides more info than any of GCBC’s charts ever have, and the market share chart above (click it to make it bigger) manifests the dominance of the best-selling midsize cars in the United States.

Scroll down for all the details on the sales of mainstream midsize cars competing in the U.S. in October 2011. The chart at the top is indeed a new way of showing market share, and you’ll like it.