BMW only sold 99 X3 SAVs in October 2010. That awful month, caused by the onset of the first-generation X3’s death, presented an opportunity for some fairly stunning year-over-year changes in October 2011. The second-gen X3 found 2321 buyers last month, a 2244% increase from October 2010’s nearly nonexistent X3 volume.

The X3 wasn’t the most popular small luxury SUV in America in October, however. The Mercedes-Benz GLK reported huge gains compared with last October, as well, and ended up beating the X3 by 173 units. The $35,600 Audi Q5 was another 116 sales above the GLK. At the top of the heap was the heftier $35,185 Cadillac SRX, sales of which are up 9% this year.

Sales details for these luxury utility vehicles are in the table below. Keep scrolling for a look at the pie chart which displays the market share for each of these nine premium utes and full analysis of midsize luxury SUVs and crossovers. 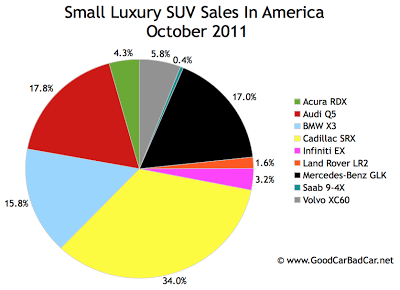 The Lexus RX, significantly less expensive than many of the midsize luxury utilities compared alongside, is a bit more expensive than many of the smaller luxury utilities from the above group. The RX has certainly convinced auto enthusiasts of its more boring qualities, yet each month the RX convinces thousands of buyers that it’s worth every penny. RX sales plunged 22% year-over-year and it still saw off all midsize contenders by a minimum of 2600 units. The Cadillac SRX was more than 1700 sales back.

The Acura ZDX, Infiniti FX, and Lincoln MKT all suffered greater year-over-year losses than the RX. There were better stories: Volkswagen Touareg sales shot up 205%, sales of the new Mercedes-Benz M-Class jumped 45%, and the BMW X5 climbed 26%. Check out America’s October 2011 midsize luxury SUV market share chart at the bottom of this post. All the sales details can be seen in the table after the jump. 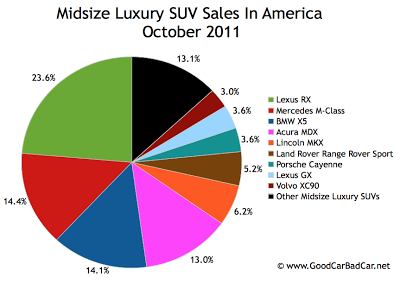