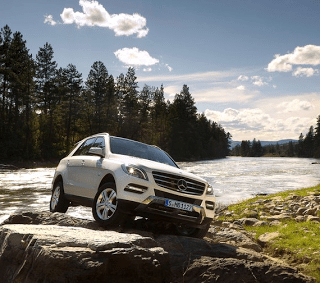 With the Range Rover Evoque intruding into its space, the Land Rover LR2’s struggles to sell in meaningful numbers continued unabated in November 2011. U.S. LR2 sales are down 27% through eleven months; sales dropped 14% in November. The Evoque wasn’t quite three times as popular, but the newest Range Rover did easily out-sell the Infiniti EX and Saab 9-4X, nearly catching the Volvo XC60 in the process.

The most popular small luxury utility vehicle isn’t really so small in reality. Nevertheless, the Cadillac SRX’s competitive pricing positions the American against strong German rivals which don’t manage to sell nearly as well. BMW X3 sales jumped 2947% from last November’s end-of-the-line first gen X3’s performance, but even the second place X3 was nearly 2000 units back of the SRX.

Monthly and yearly sales figures for all these vehicles, both American and Canadian, can be accessed by making selections in the dropdown menu at the top right of this page. Keep scrolling for a look at November’s U.S. sales data on larger and more expensive luxury SUVs and crossovers. Full-size luxury SUV sales data can be seen here. Last month’s version of this post is essential reading, so get on it.

Acura ZDX sales remain pitifully low and have been cut in half this year. November sales, however, were down “just” 19%. Percentage drops don’t tell the whole story, but on these terms, no midsize luxury SUV fell harder than the rather large Lincoln MKT. The ugly (and getting uglier) MKT slid 45% in November. Sales of the similarly vast Audi Q7 sales plunged 40%.

Mercedes-Benz M-Class sales, on the other hand, jumped 38% in November, topping the Cadillac SRX by 60 units. The M-Class was America’s fifth-best-selling premium vehicle last month. The BMW X5, up 31% in November, was America’s ninth-best-selling premium vehicle. The Acura MDX’s 3308 sales ranked it twelfth. In 24th and 27th spot, respectively, were the Lincoln MKX and Land Rover Range Rover Sport. 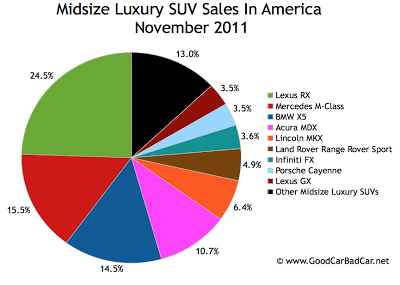