There’s a new entrant in the small luxury SUV segment for the summer of 2011. Sales of the handsome, Cadillac SRX-related Saab 9-4X began in July. Saab’s USA dealers sold one 9-4X for every 243 SRX utilities Cadillac sold. Expect 9-4X sales to improve in August. Over the coming months, however, Saab HQ needs to make sure consumers are confident that the company has a future if they’re going to fork over between $33,380 and $48,010 for a 9-4X.

Saab used to have a competitor for midsize luxury SUVs as well. (I realize some would prefer to see the 9-4X and SRX listed with the midsizers, as well.) The 9-7X was a Chevy TrailBlazer-based sport-utility with as much Swedish content as an Italian meatball. In Aero trim it was ridiculously quick and actually somewhat fun to drive. Saab sold 2272 9-7Xs in 2005 in America, another 5789 in 2006, 5257 in 2007, 3660 in 2008, 2218 in 2009, and a handful more last year.
Those figures didn’t compare so well with competitors like the Lexus RX or Acura MDX. Saab defenders say the 9-7X, and every other Saab for that matter, was never meant to compete at a high-volume level with major luxury nameplates. Not only does that theory sound like nonsense when you consider that Saab sales slid 82% between 2003 and 2009, an indicator that sales were at one point half-decent. But the theory also seems odd given that, by selling very few vehicles, Saab became an unsustainable business.
Successful automakers, even struggling ones like Lexus and Acura, sell bunches and bunches of utility vehicles in the United States. Lexus RX sales fell 33% in July (but were up from 5141 in June) to 5471. Acura MDX sales rose from 3374 in June to 3438 in July (down 18% year-over-year). The BMW X5 was up 18.3% to 3330; that’s a 5.5% upswing from June. 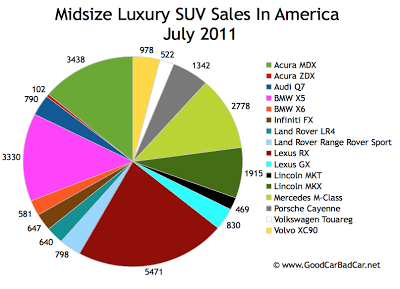