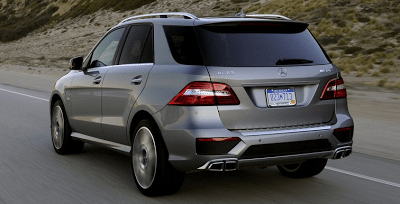 German luxury SUVs, nonexistent just 15 years ago, are consistently popular vehicles in America today. Including the $43,375-$61,995 Volkswagen Touareg, 16,943 German luxury SUVs and crossovers were sold in the United States in January 2012. That equals 1.9% of the American new vehicle market.

The leader of the German SUV pack is Mercedes-Benz’s M-Class, sales of which were able to shoot up 61% now that the third-generation ML is fully on stream. BMW X5 sales fell in January, but not to the extent that the X5’s total sunk beneath that of the Audi A5 or Mercedes-Benz GLK, both of which beat the BMW X3. The Porsche Cayenne finished January 127 sales ahead of the Audi Q7; the Q7 was 35 sales out in front of the Volkswagen Touareg. Finally, BMW X6 sales slid 21% to 282. (Mercedes-Benz also sold G-Wagens and GL-Class SUVs, both of which are shown with the large luxury SUVs.)

The most popular BMW SAV in Canada in January was not the X3, X5, or X6 but the smallest X1. BMW, of course, does not sell the X1 in the United States despite the northerly evidence which suggests success is there to be had.

Not a single one of these Germans were America’s best-selling luxury SUV or crossover in January. Sales of the Lexus RX slid 14% to 5038, enough for top spot, and the Cadillac SRX was down 2% to 4166, 164 sales ahead of the Mercedes M-Class. The Lexus was America’s third-best-selling premium vehicle in January. Two German cars, the BMW 3-Series and Mercedes-Benz C-Class, finished in the top two spots.

Detailed January sales figures and year-over-year numbers for 25 luxury SUVs can be viewed after the jump. Find monthly and yearly sales data for these models and every other nameplate on sale today through the dropdown menu at the top right of this page or on GoodCarBadCar’s Sales Stats page. 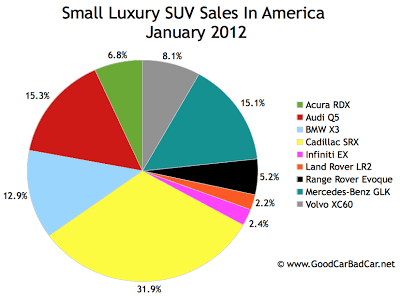