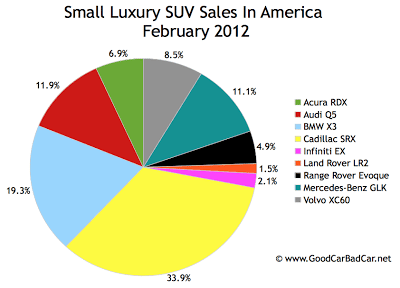 Americans acquired 715 Range Rover Evoques in February 2012. This means the Evoque accounted for 22% of all Land Rover sales – it is one of five nameplates in the Land Rover range. In the overall Jaguar/Land Rover group, the Evoque was responsible for bringing in 17% of all sales. It represents 12.5% of the group’s offerings. 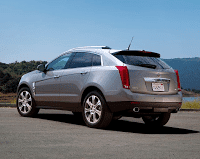 In that context, the Evoque seems popular. Compared with the fast-growing small luxury SUV segment, however, the Range Rover Evoque is… back of the pack. Cadillac sold 4983 of the less-expensive (and quite hefty) SRX crossovers in February. BMW X3 sales jumped 43% to 2831. For the ninth time in the last fourteen months, Audi Q5 sales improved on the year-over-year scale, as well. Q5 sales reached 1754 in February, 124 units better than that which was achieved by the Mercedes-Benz GLK.

After the jump you’ll find detailed sales figures for the smaller luxury SUV crowd as well as the “midsize” SUV segment. Land Rover sold 637 LR4s and 1091 Range Rover Sports. Mercedes-Benz M-Class sales jumped 77% in February 2012. Lexus RX sales nearly reached 5800. Monthly and yearly sales figures from the United States and Canada can be accessed through the dropdown menu at the top right of this page or on GoodCarBadCar’s Sales Stats home. 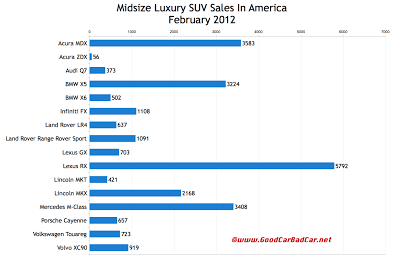