The Lexus GX was down 22%. Other Japanese SUVs and crossovers in the first chart below include the Acura MDX (down 29%), the Bad 8-losing Acura ZDX (down 81% straight onto the Worst-Selling Vehicles In America list), and the Infiniti FX (down 5.5%).

Range Rover Sport sales improved at a 39% clip. Audi Q7 sales rose 29%. If you’d prefer to see the Buick Enclave listed here instead of with the mainstream ankle biters you might also be interested to know that Enclave sales were up 17% in August 2011. 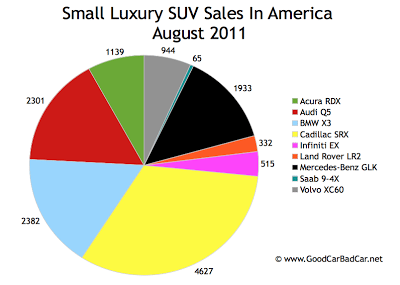 Don’t act so shocked: the handsome Saab 9-4X isn’t gaining any traction in the American marketplace. Forecasters don’t believe Saab’s future will be healthy. 9-4X sales improved 282% compared with July 2011 but it was still one of the lowest-volume vehicles on sale in America in August.

Which luxury crossover would take over for the Lexus RX if RX sales indeed dropped 24% next August? That’d be the Cadillac SRX, a vehicle which is as much a rival for the RX as anything listed in the upper chart. SRX sales rose 7% in August.