E-Class Mercedes sales dropped 9% in September 2011 but it remained way out in front of the BMW 5-Series and all other rivals. Mercedes-Benz sold 47,824 E-Class sedans, coupes, convertibles, and wagons in America in the first nine months of 2011. That’s up 7% compared with the first nine months of 2010. BMW 5-Series sales are up 55% this year but ended September nearly 10,000 sales behind the E-Class.

In other direct battles, the Mercedes-Benz CLS-Class’s 399% year-over-year increase propelled it to 709 September sales. Audi sold 693 A7s. Volvo sold 524 S80s in the battle of the bland; Acura sold only 43 RLs. Acura RL sales plunged 82%; certainly more than enough to land it on America’s Worst-Selling Cars list. Saab had an abysmal month but sales of the 9-5 did jump 165%.

Keep in mind, the powerful blue line representing the Hyundai Genesis includes sales of the Genesis Coupe. You can check out larger rivals of the Hyundai Equus here.

We’re only days away from BMW’s Facebook reveal of the next 3-Series, but BMW managed to sell more copies of the company’s most popular this September than last. BMW 1-Series sales, on the other hand, fell 42%, as it was the only BMW model to report declining year-over-year sales. The Saab 9-5’s gains were more than offset by the Saab 9-3’s decline. Losing 856 units is rough, translating to an 82% drop.
The RL’s decline was awful, but sales of Acura’s smaller sedan, the TSX, were up 38% in September 2011. Cadillac CTS sales rose 24% from September 2010 levels. Sales of the midsize Ford Fusion-based $34,645 Lincoln MKZ improved notably, up 54% from 1254 last year. Mercedes-Benz C-Class sales were up 32% but the smallest sedan in Mercedes-Benz’s U.S. lineup finished September more than 2400 sales behind the BMW 3-Series. 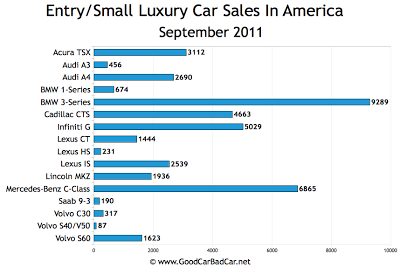